Nishant has been key in several moments of the History of Monster Legends. On his last big feat, Samael tried to go against him to avenge his brother Nisael’s death, but Nishant was able to resurrect Nisael as a soldier at his service and convince Samael to join his side too. He seemed to have every Dark monster under his thumb until resources like Mythic Amber or Stardust started empowering Dark monsters that he could no longer force to stay in his ranks.

After that, Nebotus’ reappearance as Lord Nebotus caused a new, bigger schism, and lots of Dark monsters ran to his side, creating the Souls Lair faction, leaving General Nishant with about half of his army, only his most faithful servants. They called themselves the Dark Blades.

General Nishant was very proud of this group and, instead of doing something big to regain momentum, knowing that neither he nor his faction had enough power, he decided to stay at his quiet Castle. He took it as a sabbatical period in which he devoted himself to his hobby of collecting remains of dead monsters, jewelry, relics, and cells. Nishant liked to call it his Museum of Dead Things. He didn’t know whether his collection would come in handy at some point or not, but his intuition told him to remain calm and keep doing his own thing.

A couple of years went by without any big disruptions to his routine until, one day, Xiron the Great burst into his Castle wanting a piece from Nishant’s Museum of Dead Things. He was able to take it, of course, since he was much stronger than Nishant and all his Dark Blades. However, in yet another display of diplomacy skills, Nishant convinced Xiron to give him one of his old relics, Xiron’s Essence, in exchange for the relic he was going to take from the Museum. Nishant took this exchange as a signal. He thought that his time was going to come soon, he just had to keep an eye on the events happening around Petra.

But things didn’t go the way he expected. He saw how the relic that Xiron had taken from his Castle was used to summon Arch Duke, and that Arch Duke had helped the creatures of the Forest banish the Barbarians who had burnt down almost their whole habitat… And in the process, something else had happened. He couldn’t understand exactly what it had been, but after the Forest had been won back by its inhabitants, Nishant’s magic, the magic of death, had debilitated drastically. It was almost like a blackout.

He was furious. If it hadn’t been for him, Arch Duke would’ve never been able to save the Forest. He’d thought his moment was closer, but now it looked like his moment would never come. And he realized that it was up to him to make it happen. If Arch Duke had been summoned with a piece from his collection, there had to be something there that he could use for his own benefit too, even if at that point he was weaker than ever.

He couldn’t do it on his own. The last time he’d experimented with cells, he’d created Nisael, but he was a zombie, a powerful one, but still a zombie, and Nishant had no desire of becoming a zombie, so he enlisted a professional to help him mix his cells with his favorite relic in his collection, the recently-acquired Xiron’s Essence.

And which professional did he enlist? An acclaimed scientist called Dr. Viktor! Dr. Viktor wasn’t eager to help at first, but when he saw Nishant’s collection of relics and after being challenged, he couldn’t hide his excitement towards Nishant’s project.

Nishant the Great is a Dark and Magic Attacker with Evasion and Torture skills. 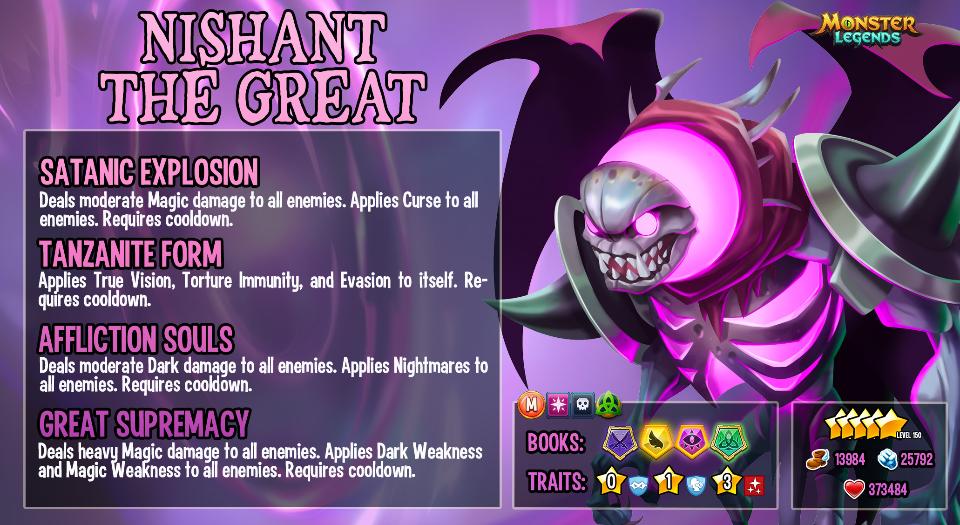 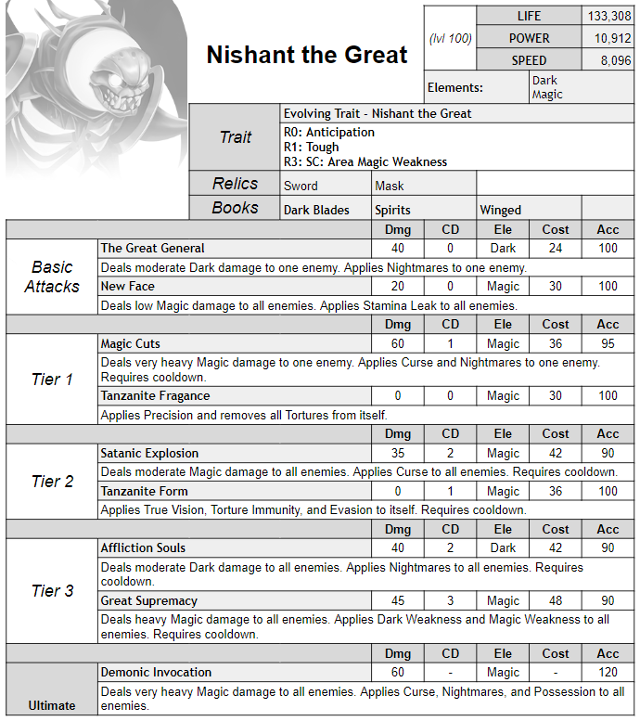