Panion and Pangoliath met at the institution they lived in. Both of them had been orphans from such a young age that they couldn't even remember what their parents looked like. They were friends straight away, but when the institution shut down due to a lack of funds, their bond grew stronger, and they became brothers. With nothing to eat and nowhere to live, Panion and Pangoliath turned to thievery as their only chance to survive.
They slept on roadsides and assaulted hapless travelers from whom they stole anything from money to a piece of fruit. But then, they encountered a victim who was different from the rest. He was traveling East on the road out of the Light Kingdom. He was wearing a ragged blue robe and, when assaulted by the two thieves, he didn't seem scared at all. Instead, he gave them a long empathetic look, pulled two apples out of his hat and sat down with them on a rock by the road.
Panion and Pangoliath told him their story and, and with that, he told them to come with him. "I have just quit my job as a magician in the Light Kingdom, maybe I can spend some time teaching you a couple of useful things. Also, there's a little hut by my house. It's full of stuff but if you help me clear it, you can live there if you like.", he said. It sounded too good to be true but, for once in their life, things actually worked out for Panion and Pangoliath.
The old magician kept his word. He gave them a home and an education and, thanks to their knowledge of the roads, they were able to work as couriers. They used their first salary to buy the magician a cake, which he received along with a note saying: "Thank you, Pandalf".\n
Panion is a Light Attacker with Control Immunity, Shield Break, Stun, and Skill Mirror. He has an Evolving Trait: At rank 0, he's Immune to Stun, at rank 1 he becomes Tough and, at rank 3, he gains Control Immunity at the start of every battle. 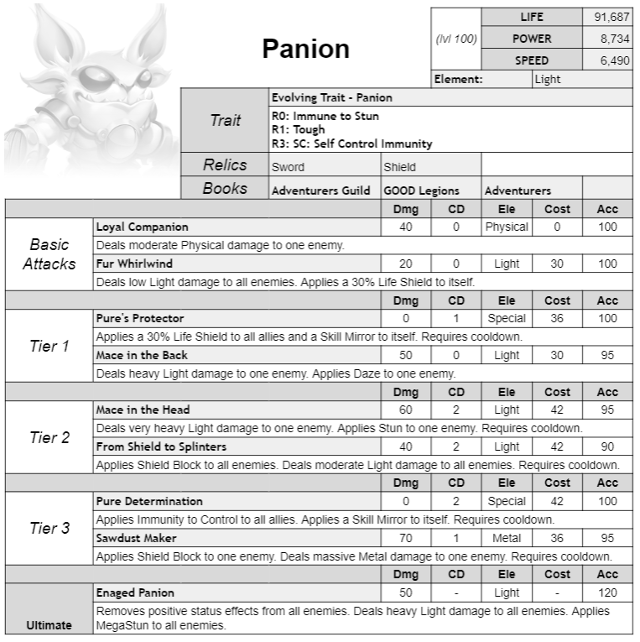