There was a time when Nebotus' evil energy scared everyone in Petra. His electric blue aura made monsters shiver and look away, hoping not to get noticed by him, otherwise, they'd be victims of his hatred. Nebotus was perfectly comfortable with his position. He was the Dark Legend. The one and only. Their fear was the fuel that kept him going.

But that was a long time ago. Years went by and times changed in Petra and the entire universe of Monster Legends. Other Legends started to appear, and as civilizations grew, Nebotus fell into the arms of oblivion. He tried to claim his title, but his skills couldn't back him up and he became some kind of a joke. Some of his Dark friends, like Fayemelina and Count Vlad, stood by his side, but even Vlad had a bigger influence than him on other monsters, so he couldn't really ask for his allegiance.

In the end, Nebotus stepped aside and disappeared from the public eye. Fayemelina was the only one who kept contact with him because the Light inside her made her feel sorry for him. No one cared where he was and, with the exception of the occasional joke, no one even mentioned him.

And then, a new generation of monsters arrived — The Mythics. Somewhere in his dark forgotten corner, Nebotus laughed at all the Legends feeling sorry for themselves, not being the strongest monsters around anymore. However, deep down inside, what he felt was more fury, because the new generation made him even weaker in comparison.

That fury got even worse when he found out that some Legendary monsters of his generation had been transformed into stronger versions of themselves thanks to a Cosmic substance called Stardust. So, he reacted quickly. He needed to get his hands on that Stardust.

Nonetheless, by the time he started searching for his loot, Stardust was an extremely coveted resource. Some monsters had come into contact with it accidentally, but Nebotus didn't have the luck or the patience to wait for the Stardust to come to him.

Then one day, he thought to himself, “If there were any Stardust anywhere, it would have to be in the most fertile corner of Petra: the Cardinal Forest.” However, when he arrived there and asked some dark spirits about it, they told him they hadn’t seen any Stardust floating around the forest.

The fact that no Cosmic life had appeared in the Cardinal Forest sounded suspicious. He wanted to see if it was true with his own eyes, so he went into the Forest under the watchful eye of Warmaster Zahra, who didn't trust him. Nebotus looked on the ground, the leaves, the branches... but there was nothing. He climbed up the treetops, wondering if the Stardust had stayed up there when it rained, but there was no sign of it. However, when he was up there, looking down on the treetops from above, he understood.

Of course the rain of Stardust had fallen on the Forest, but it wasn’t floating around, it had been absorbed by the trees.The mine of Stardust he was looking for was right in the heart of the Forest, where all the sap from the trees goes and becomes magical: he needed to find Hyperia!

When he got to the heart of the forest, he cleared the leaves off the ground and there it was: Hyperia. He lifted his sword and stuck it into the ground! Zahra understood what he’d found and tried to stop him, but she wasn’t fast enough.

He threw himself on top of the hole he had opened and Zahra on top of him, but there was an explosion underneath and a dense black mucus blasted out of the ground. It shot him and Zahra up so high that they reached the entrance of the Cosmic portal. The Warmaster fell from the sky back into the forest and he was swallowed by the river of black mucus, which flooded into the portal and blocked its entrance. It was the end of the Cosmic Era but, without knowing, Nebotus had started a new Era of his own: the Corrupted Era.

That black mucus was Lutum, a new resource that was way stronger than Stardust, and he was covered in it! Nebotus transformed into the monster he'd wanted to become for years: Lord Nebotus.

He could feel the hatred towards the world that had pushed him aside running through his veins. He was ready to conquer it and make everyone kneel before him. There was only one problem: In the process of closing of the Cosmic portal, he had lost his armor, his sword and his amulet. Without those relics, part of him was missing. He couldn't go out into the world. He needed help, but this time, he had something no one else had to buy the loyalty of his helpers: Lutum.

It took time, unexpected alliances, some setbacks (like the discovery of Purity), and lots of Corrupted servants, but in the end, Lord Nebotus recovered his relics. Now, he is finally ready. Who's laughing now?

Lord Nebotus is a Dark Attacker who can apply Corruption, Death Countdowns, or Nightmares to enemies, or gain Evasion, Double Damage, and Precision. He has an Evolving Trait: At rank 0, he's a Bulwark. He gains Anticipation at rank 1, and Immunity to Possession at rank 3. At rank 4, he becomes a Status Caster, applying Nightmares to all enemies at the start of the battle. At rank 5, he'll also gain Evasion at the start of the battle. 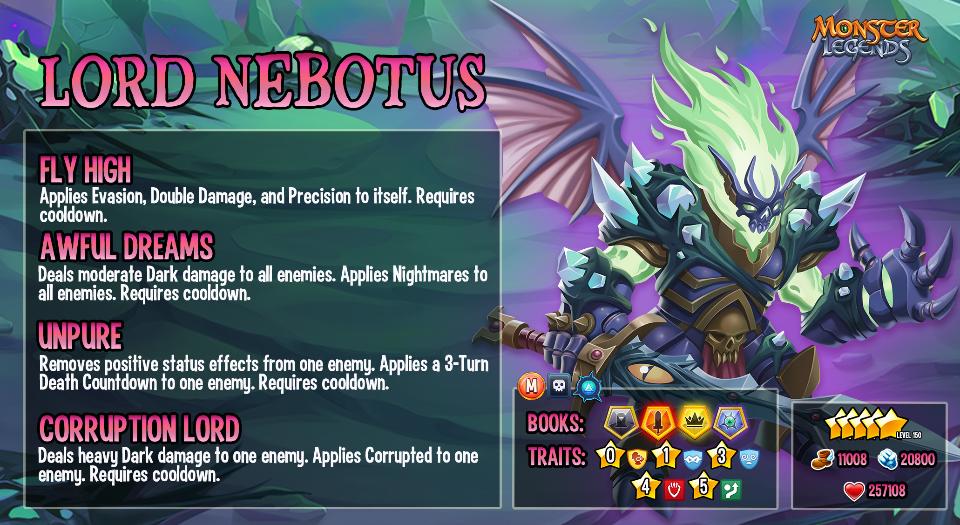 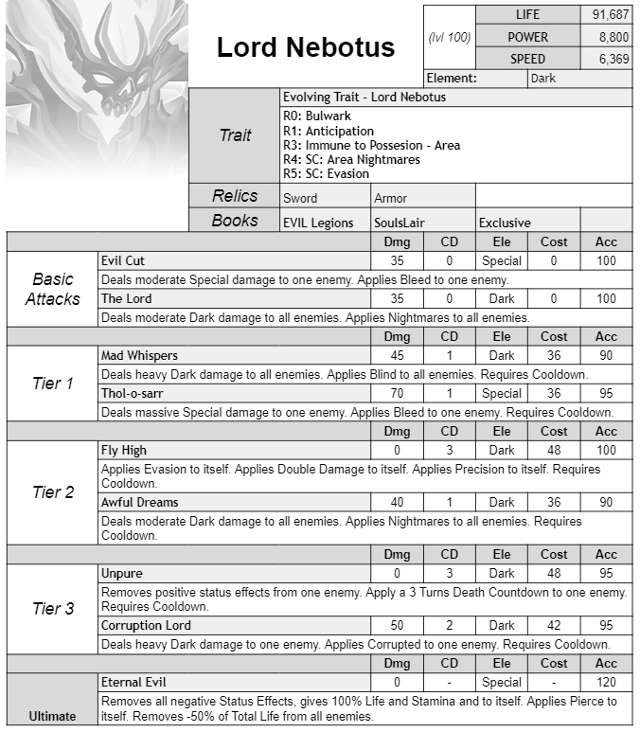