Santerion and Thundeer are two very busy monsters at this time of the year. Too busy in fact. After the Cosmic explosion, so many monsters arrived or were born in the Monster Legends universe that they couldn’t prepare presents for all of them on their own. For this reason, Thundeer contacted Ingenica. She had been the one to build Santerion for him, so he knew that she’d send them the best solution.

A couple of weeks before Christmas, Thundeer received a crate from Ingenica. There was a note attached to it. “Dear Thundeer, inside this crate you’ll find Roboelf, the little helper I’ve created for you and Santerion. Assemble it, insert the microchip, and put it to work! Have a lovely Christmas - Ingenica”.

Thundeer took the artifact out of its crate and rushed to assemble it. They didn’t have much time left before Christmas. When he was almost done, he asked Santerion to pass him the microchip he needed to switch it on, but Santerion was a bit distracted wrapping presents and reached out for the wrong object. Thundeer was in such a rush that he didn’t even look at what he’d been given. Only after he had switched Roboelf on, did he realize that what he had inserted in its core wasn’t the microchip, but a Stardust rock that they were supposed to deliver as a gift.

The bad news is that now, someone’s going to receive a microchip they won’t be able to use, but the good news is that Roboelf isn’t just an amazing helper, he’s also a Cosmic bodyguard for Santerion, so when Krampus and his friends try to ruin Christmas, they won't stand a chance! 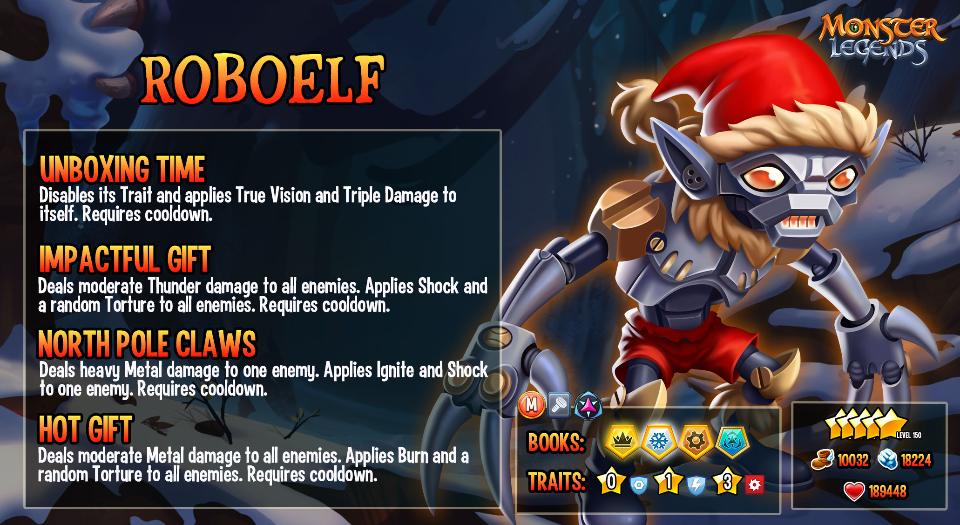 Roboelf is a Metal Attacker Artifact who can apply more than one Torture skill to all enemies in one go. He can also sacrifice his trait to deal Triple Damage and gain True Vision. Roboelf has an Evolving Trait: at rank 0, he's an Artifact, at rank 1, he gains Thunder protection and at rank 3, he will apply a random Torture to all enemies at the start of the battle. 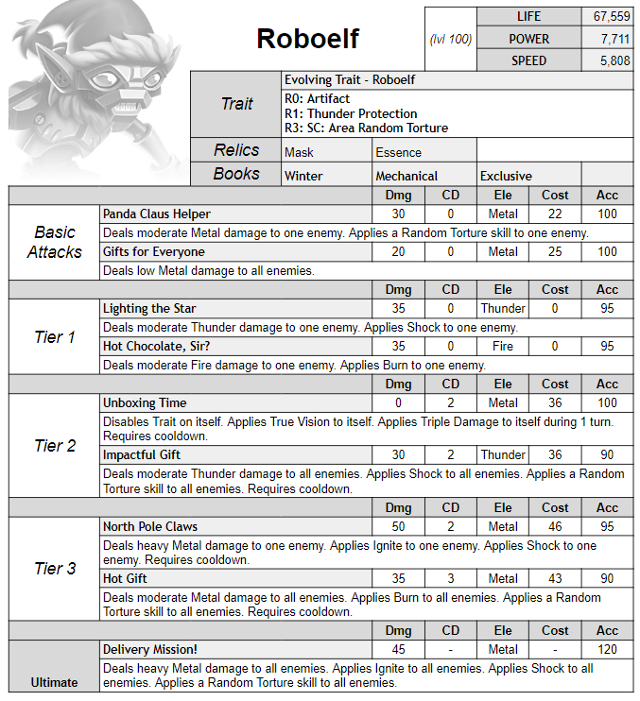