Lightmare used to live in the dimension of nightmares. He stepped into a monster's subconscious and unleashed chaos to turn the dreams into terror. The fear and stress he caused made him feel alive. But one day, he visited a baby monster’s dreams and searched everywhere in her subconscious for things that terrified her. There was nothing. She actually seemed really happy to have him as a visitor in her dreams.

Lightmare tried to pull classic tricks: abominations, fires, bugs,… nothing worked. He asked her why she wasn’t scared. The little monster explained that her parents had died and all they had left her was a dreamcatcher. Every night, she went to sleep and entered the safe space that her parents’ dreamcatcher created for her. Nothing bad could ever happen there. The problem was that Lightmare couldn’t leave until he had turned her dream into a nightmare so he was trapped!

“I know how you can get out, but I don’t want you to leave! I don’t want to be alone again. I’m always alone”, she said with tears in her eyes.

Lightmare’s heart broke. Suddenly, he didn’t care about nightmares anymore. All he wanted was to keep The Dreamer safe and to give her the happy life she needed.

“You don’t need to be alone, come with me”, said Lightmare. “Where I'm from, there are lots of baby monsters like you. You’ll never be bored or alone – I’ll protect you.”

He convinced her, and The Dreamer pulled out her most precious belonging: the dreamcatcher. “It is coated with Stardust," she explained. "If we hold it together, close our eyes, and concentrate on a happy memory, its Cosmic power will take us to the world of the awoken.”
Lightmare held on to the dreamcatcher and closed his eyes as she had instructed, but he didn’t have many happy memories, so he chose to concentrate on his will to give The Dreamer a happy future. It worked.

They were transported together and when they opened their eyes, it felt like a fresh start for both. Time passed and Lightmare kept his promise to protect The Dreamer and, in return, she made him a better monster who didn’t need the fear of others to exist. 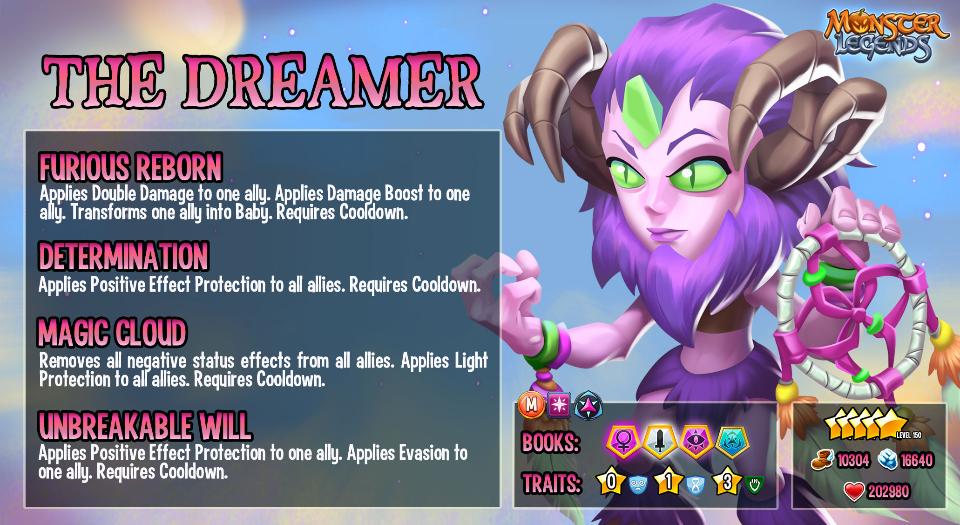 The Dreamer is a Magic Support monster with Evasion and Positive Skill Protection. She can apply this to any ally! Plus, she can also remove Negative Effects and apply Light Protection to all allies. There’s more. Watch how she applies Double Damage, Damage Boost and Back to Baby to an ally of her choice. The Dreamer can apply Positive Effect Protection to all allies too. To top it off she also has an evolving trait: at rank 0 she has Possession Immunity, at rank 1, she gains Cooldowns Activation Immunity and at rank 3, she becomes a Status Caster gaining Area Nightmares Immunity. 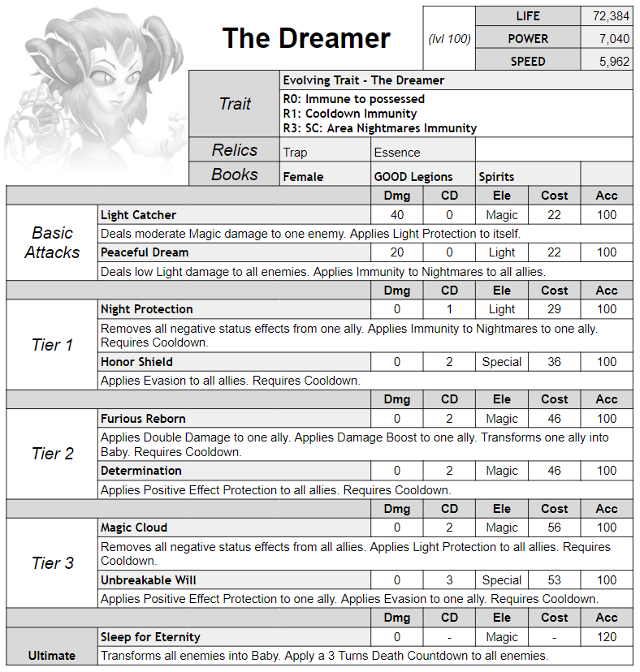