Varuna had been a soulless pirate ever since he traded his soul in exchange for his life. After which, he fought battles, but didn’t enjoy them, he sank Cavenfish’s ships, but it brought him no joy. Everyone around him appreciated his brilliance, but him.

Then, one day, he was trying to pull his anchor out of the sea after a night of rest, but the thing seemed to be stuck on a coral reef or something. He kept pulling until the anchor finally flew out, and with it, a massive starfish monster that landed right on the deck.

“Who are you?” asked Varuna, trying to hide his fear of the creature.
“I’m Spawny!” it answered joyfully. “Thanks for taking me with you!”
“With me? No, no, no. Get off my ship. My crew’s complete.” said Varuna nervously.
“No, please! I’ve got something you’ll want! Let me stay and I’ll share it with you!”
“I haven’t wanted anything for very long. And I can’t see that changing. Now get off.” said Varuna once again.

However, Spawny, who’d been living a very dull life under the sea, was determined to go on an adventure and, instead of replying or resisting, he took action. He stood still, opened all of his tentacles and squirted some kind of glittery water out of his suckers.

The strange water soaked Varuna and he was about to attack Spawny for drenching him when he started feeling funny. He looked at his pincers and saw they were turning purple, his anchor was golden now and, most importantly, he felt his soul was back.

“What did you just do? How did you do that? I sold my soul many years ago, I thought I would never get it back. You’ve saved me!”
“It’s Cosmic power! I myself got it only a couple of months ago, but it’s amazing what it can do!” answered Spawny even more joyfully than before. “So… do you have room for me in your crew now?”
“Yes,” said Varuna, who still couldn’t believe the new strength he was filled with. “That’s the least I can do for you, my friend.”
“Cool! I’m glad to have you as my Captain, Vap… What was your name again?”
“Varuna, I’m Captain Varuna.”
“Varuna? Nah, you’ll need a friendlier nickname. I’ll call you… Varupapu!”
“Absolutely not. That’s a ridiculous name. You’ll call me Captain Varuna like everyone else!”
“Sure, Varupapu”, said Spawny jokingly.
“I’m starting to regret this already…”, said a grumpy Varu…papu.

It was the beginning of a great friendship. 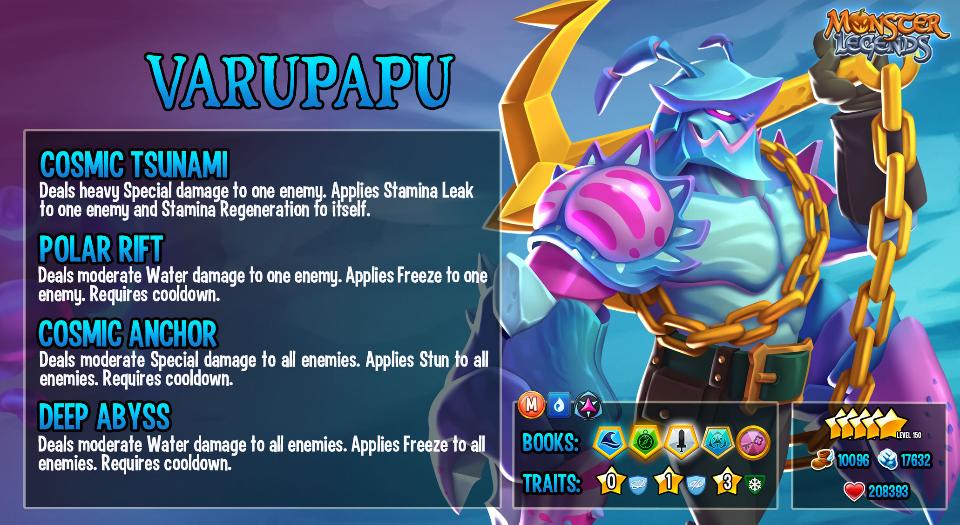 Varupapu is a Water Controller with single-target and area Freeze and Stun skills. He can also play with Stamina, both draining it from his enemies and regenerating it for himself. You can still recognize old Varuna's style, but he's Cosmic now! Varupapu has an Evolving Trait: at rank 0, he's Immune to Stun, at rank 1, he gains Immunity to Blind and, at rank 3, he becomes a Status Caster, gaining Immunity to Freeze at the start of every battle. 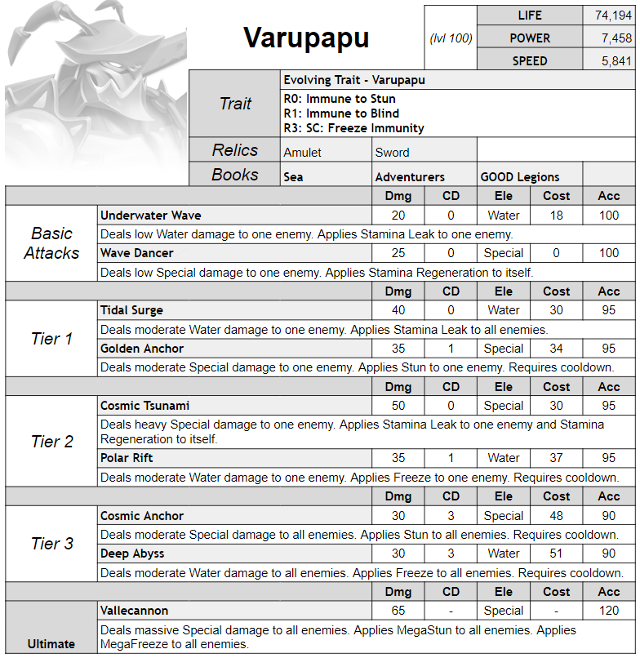