Because of its lightness, not a lot of Stardust from the explosion of the Distant Star reached the bottom of the ocean. Most of it flew with the wind or stayed afloat. However, there was a particularly heavy piece of the exploded Distant Star that did make it onto the seabed, hitting a little starfish called Spawny, who was sitting there peacefully eating his seaweed.

He was really disturbed by the Stardust rock and started punching it as if it was a living entity who had attacked him. In the end, he cracked the rock open and a lot of Stardust started coming out, floating away and getting mixed into the sea currents. Spawny accidentally swallowed some of it. It wasn’t a lot but its magic was so fresh from the recent explosion of the star that it immediately had an effect on him, turning Spawny into a Cosmic monster.

Spawny spent months testing his powers on little creatures at the bottom of the ocean, but he was getting really bored. He wanted to travel and have real adventures.

One day, he saw something from afar that was tangled up in seaweed. It was an anchor. He suddenly saw the light at the other side of his tunnel of boredom. If there was a ship at the other end of the anchor’s chain, he could go on an adventure! Spawny noticed that someone was pulling the anchor, but it was stuck in the bush. He untangled it and held on to it tightly. After a second, there was a new pull and the anchor went up. What and who was outside the surface of the ocean? 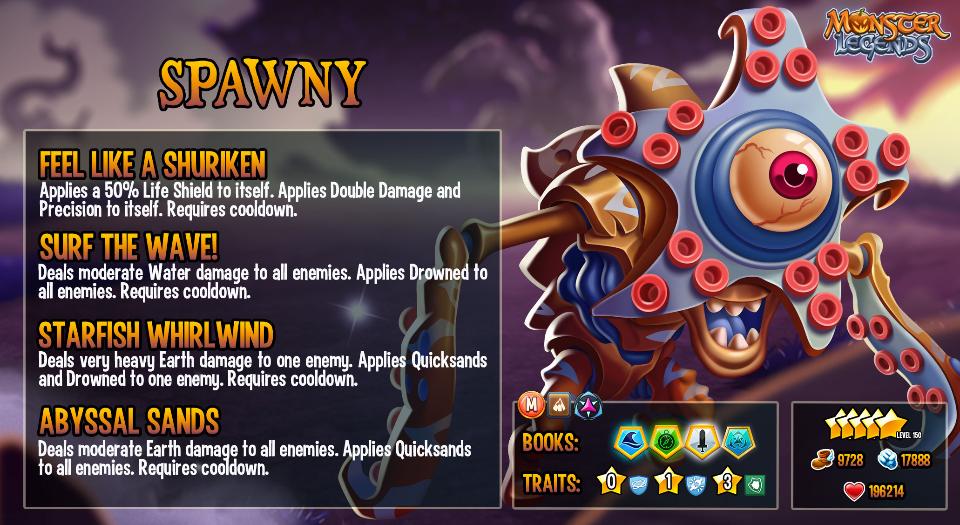 Spawny is an Earth Attacker with Torture and Shield skills. He can apply a 50% Shield, Double Damage, and Precision to himself in one move or combine damage with Quicksands and Drowned in different skills. He has an Evolving Trait: at rank 0, he's Immune to Stun, at rank 1, he becomes Immune to Control and, at rank 3, he becomes a Status Caster, gaining a 50% Life Shield at the start of every battle. 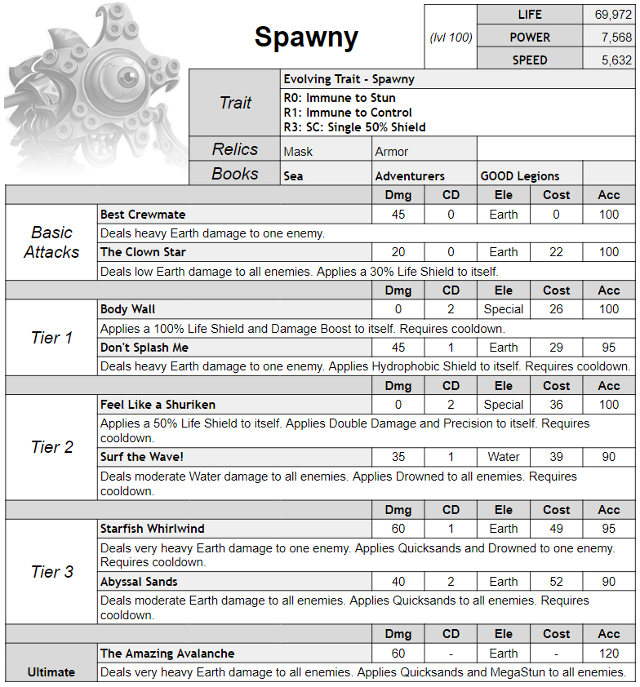