For every night, there's a day. For every kind soul, there’s an evil spirit waiting to pounce. That’s the law of balance in the Monster Legends universe. It comes as no surprise then that Mr. Beast has finally met his immortal match.

There are but a few greedy monsters that are yet to encounter Mr. Beast and his righteous wrath. You know what they say; “Don’t hold onto too much, or you’ll have the beast at your door”. Rotten, the corrupt absorber of souls, heard this saying and came up with a plan to escape a visit from Mr. Beast. He decided that if Mr. Beast was going to arrive at his door, he, and his door, would be ready for him. With this, of course, Rotten was referring to the Cosmic portals he lingered near at night time – to catch the souls that passed through. He’d drag Mr. Beast into one of the neighbouring portals and be done with him forever.

Sure enough, one night, Mr. Beast appeared. Before he even caught a glimpse of Rotten, he was grabbed by the tail and yanked towards one of the portals. There was another not more than a few metres away either so he dug his claws into the rocks beneath him and pulled against Rotten with all his might. The tug-of-war didn’t last more than a few seconds as the tip of Mr. Beast’s tail entered the first portal, and his front paw reached out into the second… There was a terrifying ripping sound and Rotten was thrown backwards. Little did they know the disastrous effects of entering two portals simultaneously.

When Rotten finally came to, before him stood not one but two Mr. Beasts. One, alive but shaking with fear, staring at the other, made out of nothing but bones and pure evil. 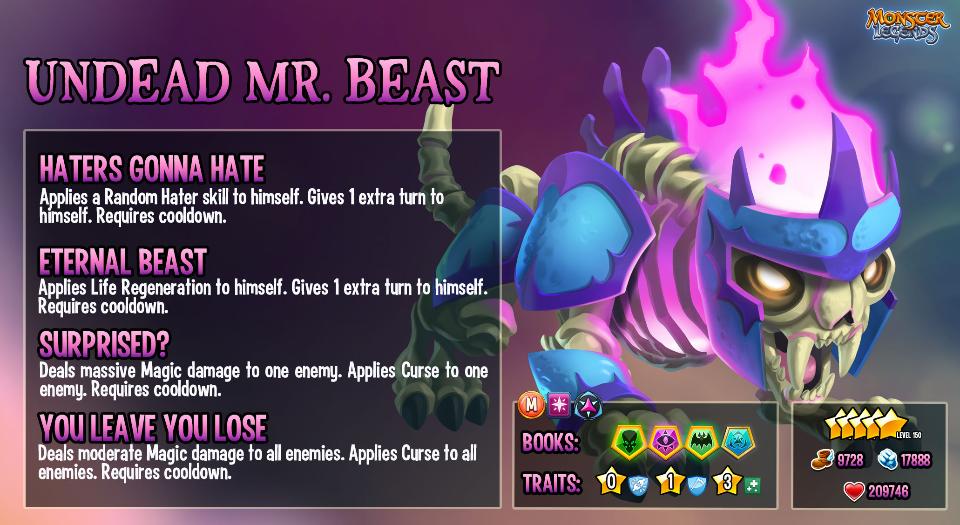 Undead Mr. Beast is a Magic Uncontrollable Attacker with Life Regeneration and Random Element Hater skills. Undead Mr. Beast can deal Damage and apply Curse to all his enemies at once! It doesn’t stop there – he can cast Life Regeneration and give himself an extra turn, or cast Random Element Hater and get an extra turn too. He can also deal out Damage and apply Guard Down to all his enemies. Undead and unstoppable! 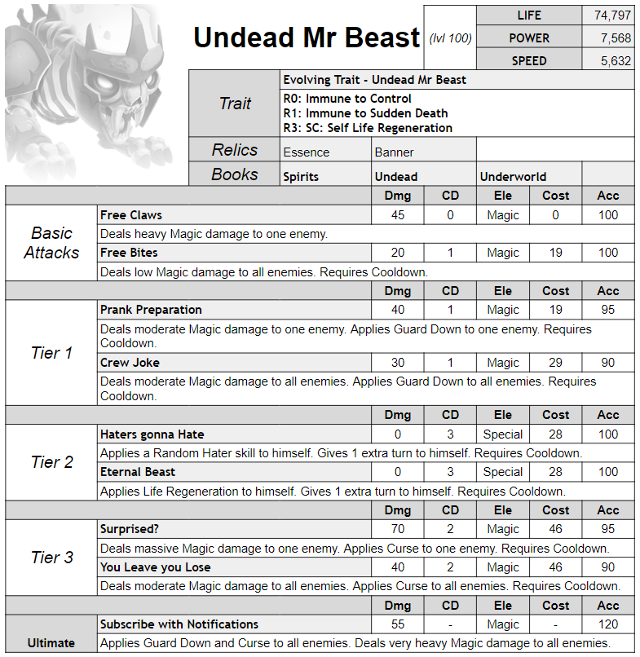