Diegael was a cherub, conceived as a heavenly creature whose mission in life was to spread love and joy. However, since he was very young, he watched Warmaster Elvira and the legion of angels fight in the name of justice, and all he wanted was to become a Celestial Paladin. No matter how many times Elvira and Barbael told him that it wasn’t his mission and he was thinking too big, Diegael knew he had it in him.

After much resistance, Elvira finally agreed to let Diegael assist Arumel on an adventure into outer space. He parted from Heaven but never made it to the galaxy where he was supposed to meet Arumel. Diegael's disappearance left everyone in Heaven devastated. They thought they’d never have his joyful presence again, but suddenly, some months later, Diegael knocked on Heaven’s door! No one could believe their eyes.

“Where have you been?!”, asked Elvira while she hugged him.

“I’m sorry I never made it to my meeting with Arumel, but I got caught in a meteorite storm and I was completely disoriented. I met these space travelers led by a guy called Vastus. He was amazing! I learned a lot from him, and after him I met so many amazing monsters with such interesting stories! The crew of the Curse of the Cosmos, the Space Corsairs,… They’re all simply outstanding. The problem is that I got so far from home that I couldn’t find my way back. I was losing all hope when the Cosmic explosion happened and I saw a new portal that took me right to the gates of Heaven!”, explained Diegael to his amazed crowd of angels.

Elvira realized that Diegael wasn’t her usual cherub. She called Warmaster Remntar and asked him to forge a big sword, worthy of the greatest Celestial Paladin. When it was ready, they held a big ceremony and Elvira declared Diegael a Celestial Paladin. As she handed him his new sword, she read the inscription on it aloud: “Think Big”. 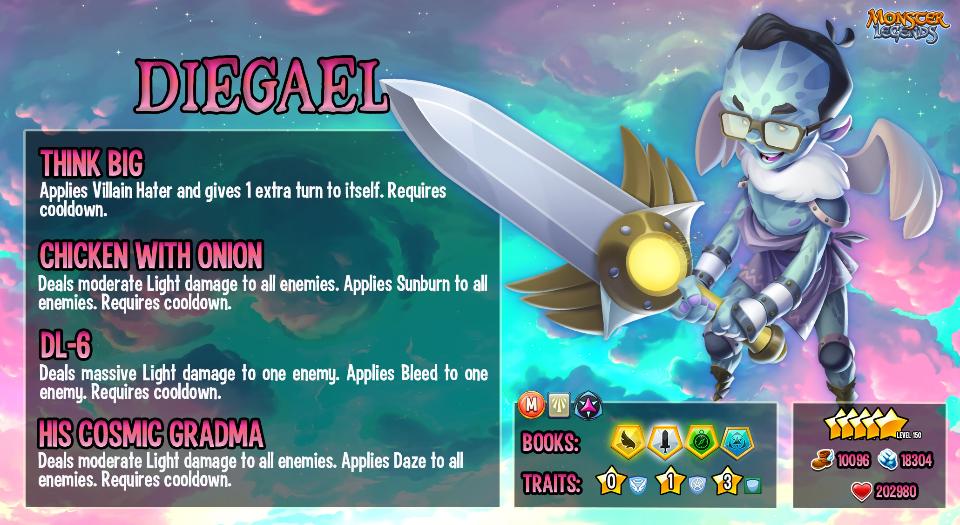 Diegael is a Light Attacker with heavy damage skills. He can boost his damage by gaining Villain Hater. This way, he'll deal Triple Damage against monsters from the Villains Book. Diegael also has some Tortures, like Sunburn and Bleed, so enemies don't stand a chance against him. He has an Evolving Trait: at rank 0, he's Celestial, at rank 1, he gains Immunity to Curse and, at rank 3, he gains Trait Protection. 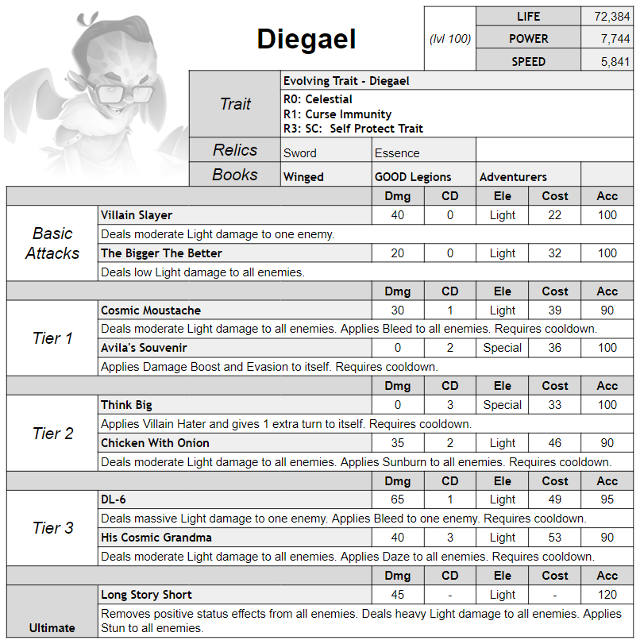