Villains have a conscience too. Malair sometimes feels bad about all the trouble he causes to innocent monsters. You know, just tiny things he feels guilty about, like constantly trying to destroy their world, stealing their most precious belongings… that kind of stuff.

One day, as he looked at his cabinet of stolen treasures, he thought, “if my mother were alive, she would be anything but proud”. He sighed and started to walk away. Suddenly, something inside the cabinet started to tremble. Malair turned, but all he could see was a sparkly powder floating up from the cabinet. He was used to seeing unusual magic effects in his hideout, so he shrugged and kept walking.

However, months after the insignificant incident, the Supervillains’ Hideout doorbell rang. Malair opened the door and his jaw dropped to the floor. It was one of the greatest sorceress there ever was, Froma, or as he would call her “momma”. The last time he’d seen his mother was at her funeral.

“Young man, don’t think I don’t know what you’ve become. You’ve brought shame to my legacy!” she said, and without waiting for his answer, she turned around and started walking.

“Momma? Momma! You’re alive! How? Where are you going?” said an astonished Malair.

“I’m going to restore my honor. I refuse to be remembered for… well, for you.” she said in utter disgust, and walked away into the night.

But Froma never looked back at him.

Froma is a Magic Support monster with Evasion and Positive Effect Removal skills. She can help her allies by removing their negative status effects or giving them Evasion, but she can also disable an enemy's trait at the same time she applies Curse to it. Froma has an Evolving Trait: She's Immune to Possession at rank 0, gains True Vision at rank 1, and becomes a Status Caster of area Stamina Regeneration at rank 3. 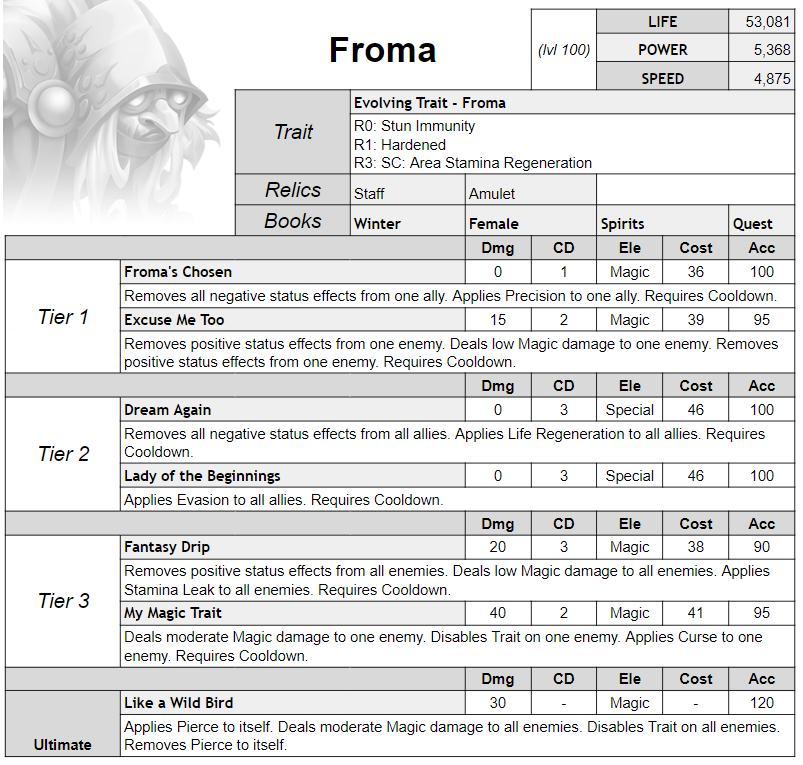