Thundeer loved to bring gifts to baby monsters, but after he was struck by lightning, his appearance became too scary, so he had an idea: He traveled for weeks to find a famous creator: Ingenica. He met her and explained his situation: He wanted her help to build a machine that would look cool and strong, but friendly in a way that baby monsters wouldn’t be afraid of it. Ingenica worked on it for months, and when it was ready, Thundeer went to pick it up. She had created a state-of-the-art robot that wasn’t scary, but it was definitely impressive. It could get through cold storms and even face villains if they tried to get in the way of Thundeer’s wonderful mission. She had called the artifact Santerion. Thundeer fell in love with it from the moment he saw it. He thanked Ingenica and took it to his home forest with him.

Soon he realized that Santerion was capable of doing a lot of work for him and that, together, they could deliver many more gifts to many more monsters. Once a year, they both go out together and travel from village to village surprising monsters. Thundeer chooses the gifts and the lucky receivers, and Santerion does the delivery while Thundeer enjoys the monsters’ joy from afar. Perfect team!

Santerion is a Metal MegaTaunt Tank. His skill set includes debuffs like Daze and Damage Reduction. He can also apply random Tortures and random Debuffs to his enemies, as well as random Protections to his allies. He can heal both himself and his allies and gain Life and Stamina Regeneration. Santerion has an Evolving Trait: At rank 0, he is Hardened and can cast MegaTaunt at the start of the battle. At rank 1, his Status Caster skill is replaced by MegaTaunt as a trait. At rank 3, his Hardened trait is replaced by Artifact, and at rank 4, he becomes a Status Caster again, applying Damage Reduction to all enemies at the start of the battle. 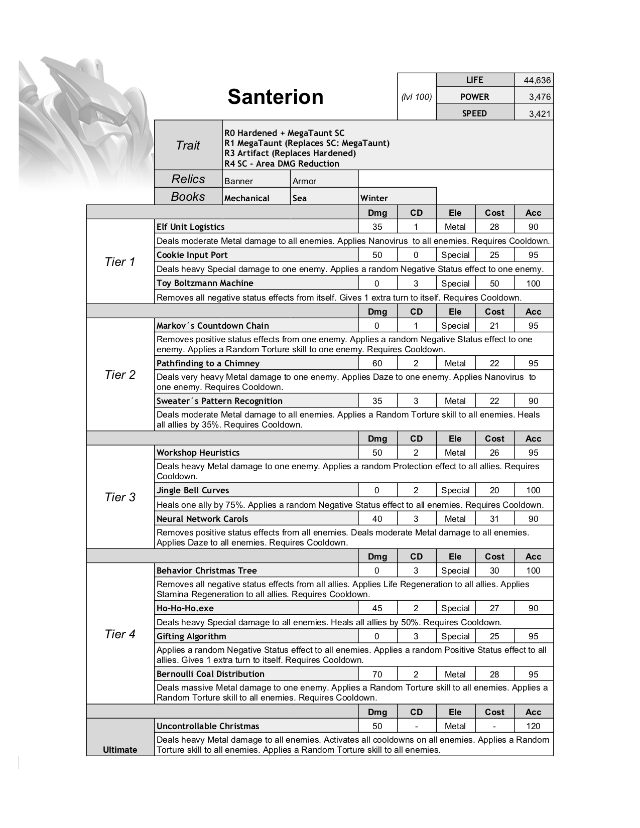