Kronx was just a young sorcerer when, centuries ago, she discovered that she could travel through time. She opened portals with an ease that puzzled everyone around her. This ability scared some monsters who thought that if she used it too much, she could break the laws of history. Kronx began to explore the lengths of her power and in her time-travels, saw wars and countless deaths, something that later became her obsession.

During Monster War II, afraid she could be killed at any moment, Kronx placed a part of her soul and some of her powers inside a lifeless steampunk artifact, thus preserving her identity for eternity. However, this solution only relieved Kronx’s obsession temporally. Years passed and, as much as she traveled back and forth in time, her body only moved in one direction; forward. She was getting old. She could sense it in her aching body, she could see the purple flame of her spirit becoming smaller and smaller, and every passing day she became less happy with the idea of simply remaining within that old artifact, even though that artifact in particular had aged especially well and her powers were working wonders inside of it.

In her life, she had accomplished many things. Kronx had managed to preserve part of her soul, she had found a way to send others, like her faithful Kronxian Guard, back in time, she had even found a way to revert friends and enemies into babies with the most interesting results and consequences, but she hadn’t found the ultimate solution to stop death. She could feel it knocking on her door, so she decided that she needed help from elsewhere. She wasn’t going to find it in the past or in the future, but in Monster Legends’ present time, where she could observe damage and health, exchange knowledge with the most eccentric geniuses, or even try to find the answer in technology with the help of monster engineers and inventors.

If there is a way for Kronx to become eternal, she’s going to find it here and now, in the Monster Legends Multiverse.

Kronx is an Elite Magic Controller that can manipulate time and transform monsters into babies using a new skill: Baby Reversion. This skill makes the receiver lose its turn but it also means they can then not be targeted. Thus, it can be used as an offensive skill to control enemies, but also in defense to avoid attacks. Kronx has an evolving trait; Cooldown Activation Protection at rank 0, Tough at rank 1 and she becomes a Status Caster at rank 3 with Self Protect Trait. She's able to apply Mega Time Stop to all enemies while applying Baby Reversion and Life Regeneration to allies. She can remove positive effects, then Time Stop and finally get an extra turn, all with a single skill. Kronx can also apply several tortures like Curse, Burning and Ignition or support an ally by giving Triple Damage. 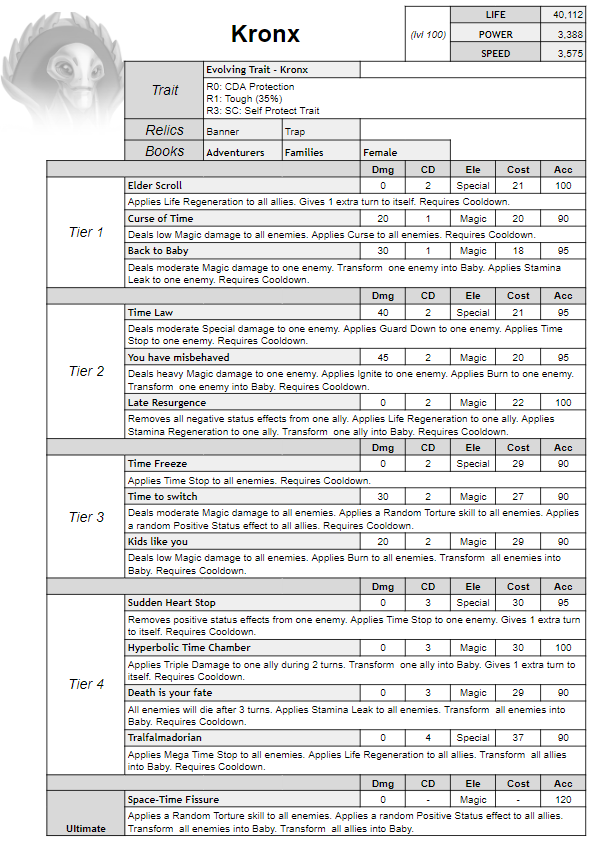