Some years ago, Kronxian Guard was one of the happiest monsters in the Multiverse. He had a great job as a guard for King Daeron. He was married, and had a beautiful daughter. One day, tragedy struck. His daughter and his wife were playing at a park when a spontaneous fight between two powerful monsters started a battle nearby. One launched an attack right when the other launched a shield, which made the attack bounce and hit… Kronxian Guard’s daughter. She was little and fragile, so her body couldn’t overcome the hit.

Her death changed her parents' lives forever. Her mother became greyer and greyer until she practically disappeared. Her father remained trapped in the past. All he wanted was to go back to the time when he was happy, so he started to talk to different sorcerers, until he heard of someone who could help him. Her name was Kronx. It was hard to find her because she rarely visited the present time, but with a little patience, he managed to meet her. Initially, she refused to take the guard back in time over and over again. She only had his best intentions at heart. She didn’t want to deceive him into thinking that he could stay back there with his dear child, as she could only intervene briefly in any given year. However, the guard was a very persuasive monster. He offered his two swords in service to Kronx in exchange for being able to relive his happy moments, promising not to change a thing. In the end, Kronx accepted,… and in turn gained her very own valiant and loyal guard!

Kronxian Guard is a Light Attacker with High Life and sustainability in battle. He has an evolving trait which gives him Stun Immunity at Rank 0; Tough (35%) at Rank 1; and at Rank 3 becomes a Status Caster that triggers Space-Time at the beginning of battle. He's the only monster besides Timerion that can do this, protecting himself from receiving any damage. He deals out quite high damage and is able to increase it even more with Damage Boost. Kronxian Guard can rid himself of all negative effects and even get an extra turn. He can protect his team with Taunt, Anticipation and also protect his own positive effects. On top of all that, he has some tortures like Curse and Bleeding too. 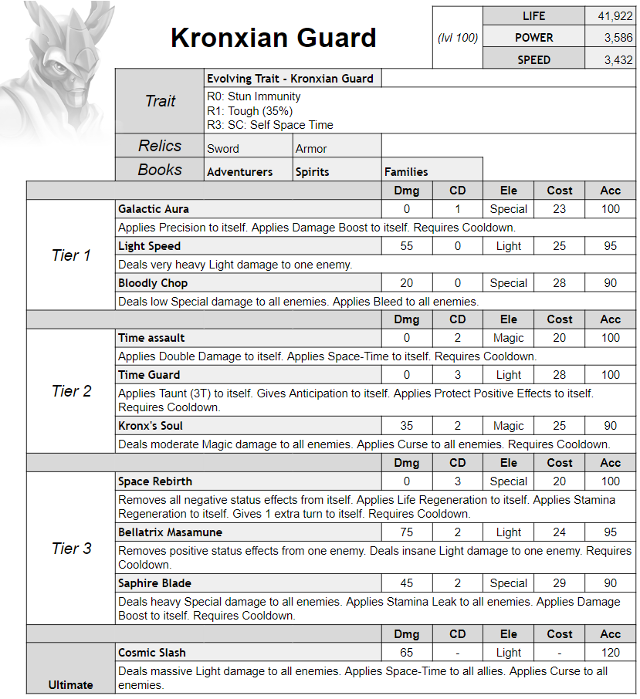