Remntar was born a tiny Light spirit. He was nothing more than a little blue flame, but he felt powerful and wanted to do something more than float around the Light Realm, he wanted to take part in big wars! He was granted a hearing with King Daeron and Queen Luthien. They couldn’t recruit him as a soldier for their army because he was too little to make a difference. However, they gave him an empty workshop in the village so that he could develop his talents there.

They expected him to specialize in potions or magic, but Remntar never lost focus: He wanted to play a part in big wars, even if he never set foot on a battlefield. He turned his workshop into a forgery and started working with iron. He began with simple shields, but soon became something of a master of weaponry. King Daeron asked him to equip the Light army and named him the official blacksmith of the realm. He was so excited that he spent months without sleeping to get his job done. The result was outstanding. He received high honors, and he started working on new things: relics! Remntar is the author of very famous relics, such as the Tenacity Shield, the Exhausting Mask, and Atum’s Armor.

Remntar was utterly happy, his dream had come true. From his humble forgery, he was making a difference in big battles. One day, he received a visit he never would’ve expected. He was opening his forge one fine morning when the Warmasters appeared in front of his eyes! Thalassa took the lead and explained that they needed Remntar’s help if they were going to try and defeat the Titans.

“We have been watching your work for some time, and we’ve concluded that, even if you’ve never been on the battlefield, you’re clearly a Metal Warmaster. No one works the iron like you, and the weapons and relics you’ve created are outstanding. Why don’t you build a suit of armor for yourself and come with us? You can be a hero.”

Remntar couldn’t believe it. A humble monster like himself, who had spent all his life working on his own, was being summoned by the greatest team of monsters of all time. He couldn’t say no to them. He designed armor for all the Warmasters including himself, and they all left to face the Titans together.

The battle was long and exhausting, but the Warmasters won. After that, they all took some time off together and went back home. Remntar was welcomed, like the hero he is, in the Light Realm, and when he opened the door of his forge, it felt like home. Now, Remntar combines his job as a blacksmith, which he will never completely abandon, with his role as a Warmaster, which brings him the thrill of battle!

This is what Remntar brings onto the battlefield: The Metal Warmaster is a Tank with amazing Support skills. He is Tough and he gives Special Protection to his allies, which reduces incoming damage from attacks of the Special type. At the beginning of every battle, he casts a 50% Life Shield upon his entire team!

On top of all of this, he has many resources to protect allies, such as Skill Mirrors, Shields, and Control Protection, and he has skills that can give Stamina and Anticipation to his allies. 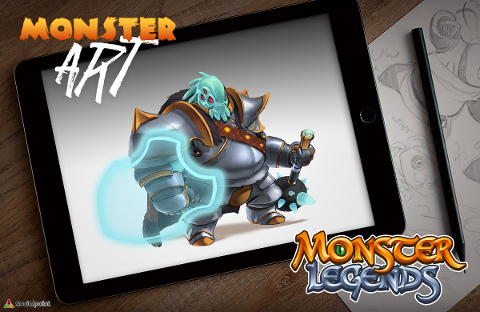