Once upon a time, there was a little innocent Sheluke who lived in a swamp. One day, the evil Dr. Hazard started using that swamp as his dumping site and contaminated it. After years of eating rotten garbage and being in contact with contamination and putrefaction, that little Sheluke turned into this pestilent beast: Fatid!

However, all that exposure to garbage hasn’t only made Fatid very pestilent, he’s also become extremely resistant: He’s a tank with a very high life who’s extremely hard to kill not only because of it, but also because he has a skill that gives him Regeneration, Double Healing, and one extra turn! And Fatid knows how to use his turns… He can Poison and make all enemies Bleed in one move, he can Poison all enemies without wasting Stamina or cooldowns, or he can play with his allies’ lives! He can resurrect one ally, giving them Triple Damage... but they will die after 2 turns. And he has one more resurrecting skill! He can bring back all allies, giving them Double Damage… but they will die after 1 turn. Fatid is one annoying rival. 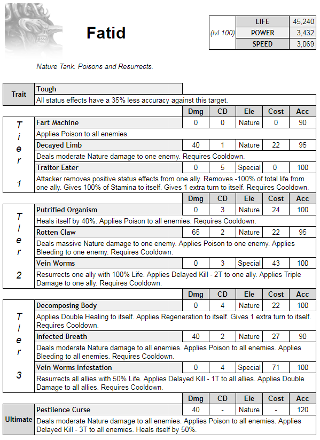