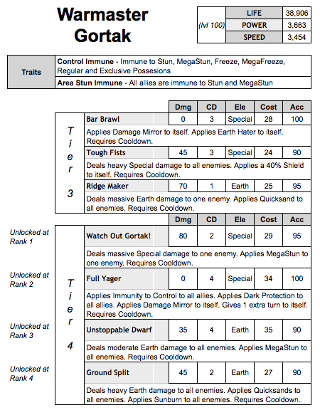 Gortak used to be the champion and hero of the miner dwarves. However, when he left with all the other Warmasters, the dwarves were left without someone to look up to. Warthak seized this opportunity to torment and enslave them, until they unearthed Atum and made him their new leader. He saved them from Warthak and kicked him far away from them. Years passed and Warthak returned when everything was peaceful and he was least expected. He had come back with renewed power, knowing how to attack Atum and his dwarves to defeat them effortlessly, so he oppressed them more than ever, avenging every bit of humiliation he had suffered with his defeat.

What Warthak doesn’t know is that the Warmasters are coming back to fight the Titans and… Gortak hasn’t forgotten about his dear miner dwarves. He won't be happy to discover what the Nemesis has done to his friends.

The first Warmaster is a heavy Earth attacker who has a very special trait: He’s Immune to Control (Stun, MegaStun, Freeze, MegaFreeze, Regular, and exclusive Possesions), and he also makes all his allies Immune to Stun and MegaStun! Yes, you read that right: Gortak’s trait works on the whole team!

Gortak is an Uncontrollable attacker. He has very powerful attacks, combined with shields and Quicksand. But he can also help his teammates by making them Uncontrollable and Protecting them against Dark.

He can also gain access to MegaStun skills that will control the majority of his enemies, (if they are not already dead)!
You will have an opportunity to collect Gortak cells every month in the Warmaster dungeons. The progress you make in the dungeons will be saved every time.