Another day at the graveyard. Another hole to dig, another body to bury… This job can get really boring, so when The Undertaker doesn’t feel like digging, he pulls a little trick out of his sleeve: If no one’s dead, there’s no need to work!

Yes, you have read right. To skip work, The Undertaker can resurrect an ally. But to make sure he’s available to perform his duties when necessary, this monster makes sure he’s a hard one to kill. After all, what kind of gravedigger would he be if he weren’t the last one to die? That’s why he can lose negative status effects and heal himself.

But The Undertaker doesn’t go into the battlefield just to be the last one standing. In fact, he can destroy his enemies, too! He can boost himself with Double Damage, and he has very heavy damage skills, as well as the ability to Stun! 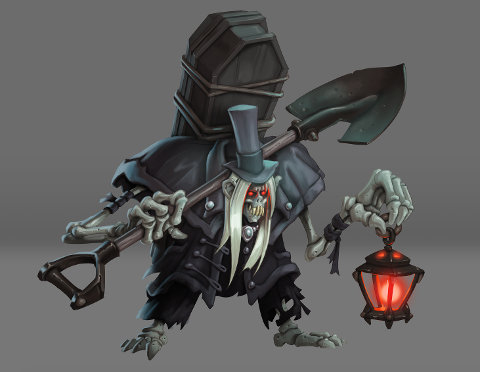