Nadiel was born and raised in the Cardinal Forest as a member of a beloved family of support monsters. As much as Nadiel respected and loved his family, he wasn’t keen on following their path in battle strategy. He didn’t like what he had seen in the forest his entire life: Monsters from outside came and cut down living trees to customize the forest to their taste: They built their cottages, they opened their paths so that they wouldn’t have to go around the vegetation on their journeys, and they came asking for help, protection, and healing. They took it all and they gave nothing.
Every Nature monster is well aware of this, but most think that it’s just the way things go. However, when Nadiel talked to all of them, he certainly managed to awaken a fighting spirit inside them. When Nadiel tried to push General Alces into the plan of kicking every single foreign monster out of the Cardinal Forest, he thought that he was right to be angry, but that banishing everyone from their territory was too extreme. Alces promised that he would negotiate some changes so boost the respect of others for Nature, but years passed and Nadiel noticed that the General’s attempts were far from enough. That’s how, one day, Nadiel decided that he would be the one to lead the cause. He climbed onto a cliff and started a speech:
“Invaders of the forest, this is Nature speaking to you! You have two moons to leave our territory forever and go back wherever you belong. If you resist, you will never see the light of day again! After the second full moon from today, our trees will grow branches that will break the cottages you built with our materials, moss will cover the paths you’ve opened through our land, and roots will rise high into the sky at the borders of our land. No one will ever enter again, no one will ever come here again asking for our help, for our healing skills. Don’t count on Nature, we are support no more.”
The end of Nadiel’s speech was met with a scream from all the present Nature monsters: “SUPPORT NO MORE!”.

Will Nadiel’s words become true? Or will the monsters from other elements be able to return enough favors and show gratitude before it’s too late? That’s to be seen...

When the big battle comes, Nadiel will be full of unpleasant surprises for his enemies. He can deal big amounts of damage. This curser has very particular abilities and skills: He can reduce the damage of an entire team to zero. He can also apply Guard Down, a status effect that will make the opponent monster receive all attacks directed at it whatever Precision the attacker has.
Depending on the weapon he carries, Nadiel will have some extra skills: The Nature weapon allows him to Poison, with the Fire weapon he can Burn and Ignite and with the Water Weapon, he can Freeze. 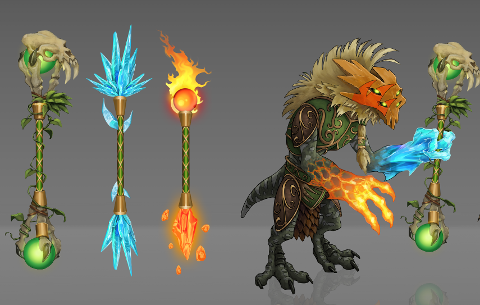