How do I play Friendly Live Battles?
To challenge your teammates, tap the new “Friendly Battle” button in the Team Chat screen. Here, you will be able to “Request a battle” or customize the team you are going to use in Live Battles through the “Change Team” button, OR you can visit our FAQs. I
By tapping on any of the modes, you will send a battle invitation to your teammates in the Team Chat.

I've requested a battle, so why my teammates don't see it?
Players playing on different versions won't see requests from each other so make sure you have the same version or try to restart the game.
Where can I change skill for different types of battles?
You can set up skills for tournament battles separately since they require you to explore different strategies with the new rules (warm-ups, limits).
There you will be able to customize the skills that your monsters will use in Tournament battles without changing the skills used in any other modes (Standard). As usual, changing skills is free and unlimited!
IMPORTANT: Make sure you set your skills before you fight as monsters' default Tournament skillset is not the same as the Standard one (used in other parts of the game). 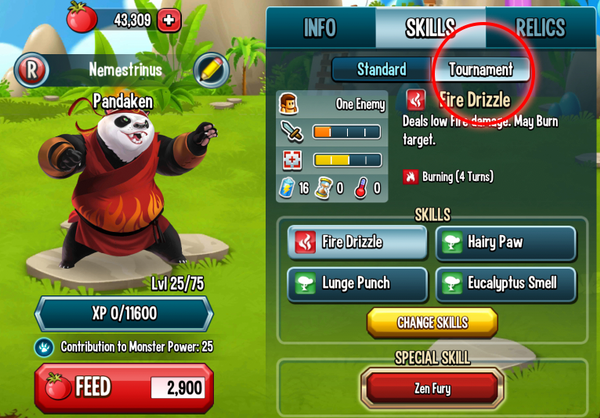 How can I challenge my friends?
Tap on the Social button and check out the FRIENDS tab, you will find a green button that will allow you to send a battle request to your friend.

A battle requests from friends will appear in the main island screen at the top.
What is Turn Limit?
In Live Battles, you will have up to 20 seconds to choose which action to take with your monster. If the timer runs out, your monster will automatically charge. However, consecutive turns of the same player get shorter to allow fast fight.
I lost my internet connection, what now?
If you lose the connection for a few seconds, there should be no problem, but if the connection is lost for a longer period of time, the opponent will claim a victory.
What happens when my game crashes?
If you experience a crash, the opponent will see a victory.
I can't see the friendly battles button in the chat!
You need to update your game!
I can't request a battle or I can't accept a battle request!
Make sure that you have selected a team and that you have a stable internet connection.
My teammate says that he/she won the battle but I clearly saw a victory on my screen!
There are 2 possibilities: