Dr. Fiend and Dr. Wattz used to work together. They were about to make a big discovery on hydraulic energy. However, they didn't have the same plans for what to do with that discovery. While the former wanted to make a contribution to science, the latter wanted to keep the finding a secret he could use on his own, so when almost all the work was done, Dr. Wattz decided that it was time to get rid of his research colleague.

He tricked Dr. Fiend into going into the deep ocean to measure currents, but when she was down there, he set her a trap and poisoned her with the venom of a mysterious giant jellyfish. Dr. Fiend was transformed into Aquafiend, an extraordinary mutant. When she emerged from the ocean, she realized she couldn't work on her research anymore. The scientific community wouldn’t take her seriously. She had lost everything.

But then, by some sort of miracle, a powerful and elegant monster who went by the name of Malair appeared out of nowhere. He told her that he saw her for the extraordinary creature she was, and offered her a home and a new family. Aquafiend accepted his kind offer.

Little by little, she understood the type of place and the type of family she had landed in. It was a training center and all her new flatmates were supervillains. Malair seemed to be the boss of them all. At first, she wanted to run away from that place but then she felt indebted to Malair so she decided to stay a while longer and help him in the lab of the training center. She soon got involved in many of his projects and, slowly but surely, she became a true supervillain herself.

To this day, Aquafiend hasn't found out the real truth: Her becoming a supervillain was never a coincidence and Malair hadn't just been a good samaritan to her. Malair and Dr. Wattz had struck the perfect deal: Dr. Wattz gets rid of his rival, and Malair gets a new creature he can shape into a supervillain!

Aquafiend is a Water Support monster who can remove negative effects and apply positive ones. She has an Evolving Trait: At rank 0, she has True Vision, at rank 1, she gains Immunity to Burn and, at rank 3, she'll give Freeze Immunity to all allies at the start of the battle. 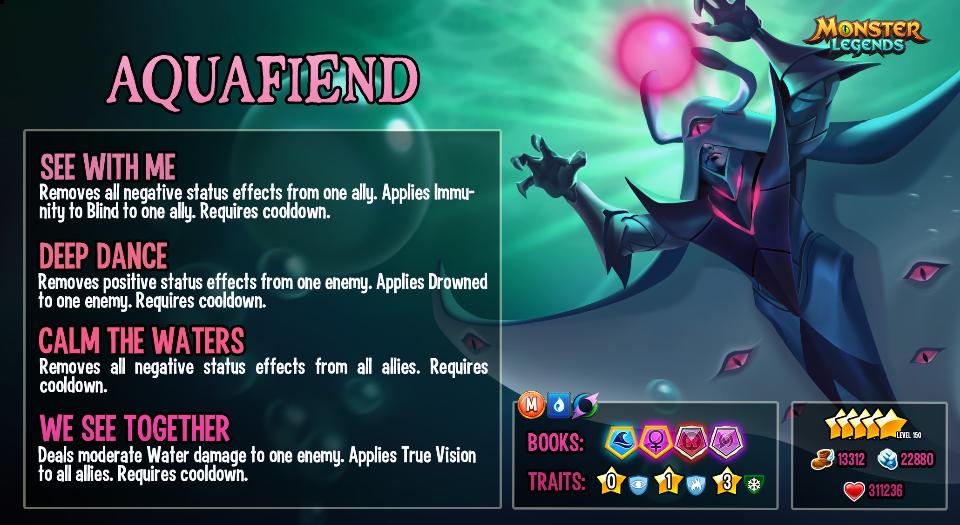 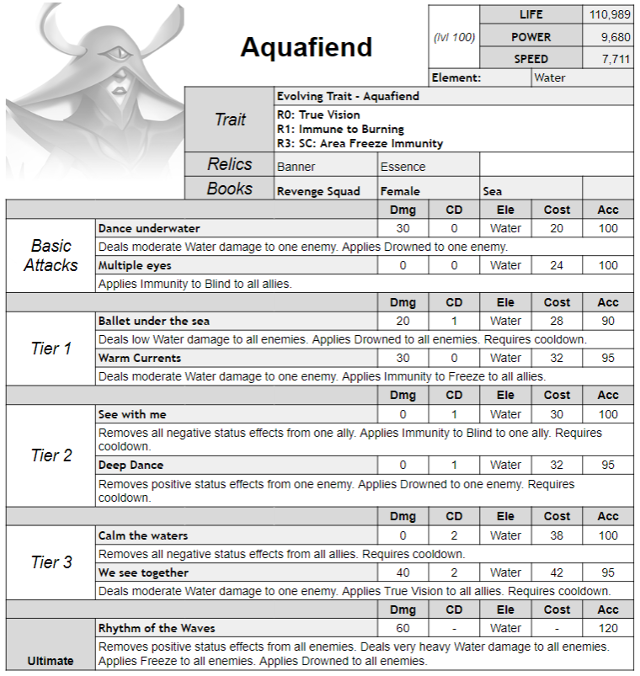