Once upon a time, there was a wizard called Pandalf. He was one of the most beloved monsters in Petra and beyond because, whenever someone was feeling lost or disoriented, Pandalf was happy to help. He could pack a punch too! Whenever he raised his staff, something epic happened.
He was a versatile monster and held several jobs, but when darkness struck many years ago, King Daeron and Queen Luthien asked him to step up as a Legendary magician in their court. As White Pandalf, he became indispensable and without him, the Light Kingdom would have never become the durable institution it is today.
Time passed, things changed, and White Pandalf decided that his job in the Light Kingdom had to come to an end. He asked to be relieved from his duties and went back to being just Pandalf, the wizard in the ragged robe. He was perfectly content like that and because he had been so important to all the righteous monsters in the past, he was able to keep in touch with most of his friends, who came to him for guidance or just to catch up.
That was until, one day, darkness struck again in the shape of Corruption, and it caught everyone off guard. Pandalf's friends immediately went to him for advice and he tried to help them by bringing Pure monsters together, but it didn't seem to be enough.
It took Pandalf a while to realize that he needed to step up again and play a key role in the fight against Corruption, but in the end, he came around and embraced Purity.
Pure Pandalf is ready to devote his wisdom, experience, and talent to the battle against Corruption! Now that's something that should worry Lord Nebotus…
Pure Pandalf is a Magic Controller with Cooldown Activation and Control and Support skills. He has an Evolving Trait: at rank 0, he's Hardened, at rank 1, he becomes a Bulwark and, at rank 3, he becomes a Status Caster, applying Stamina Regeneration to all allies at the start of the battle. At rank 4, he'll also give them Precision and, at rank 5, they'll gain Evasion too! 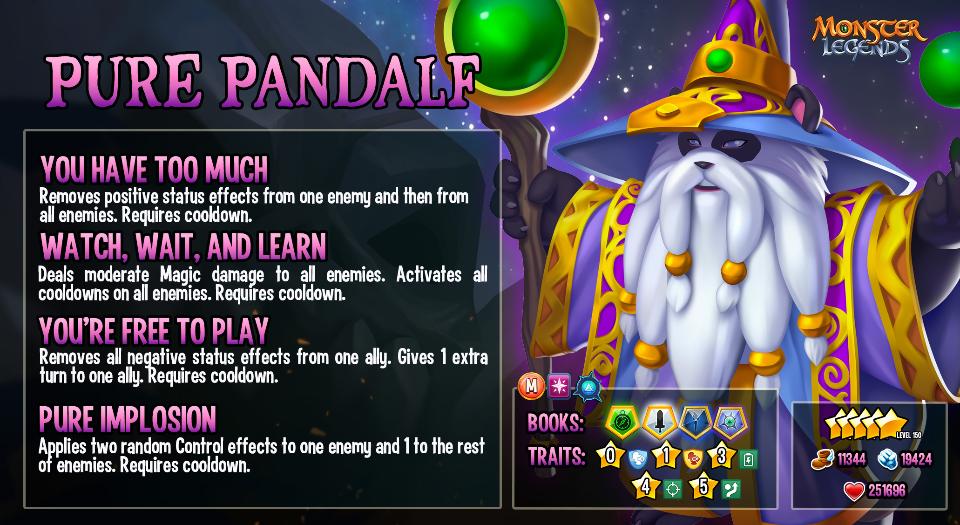 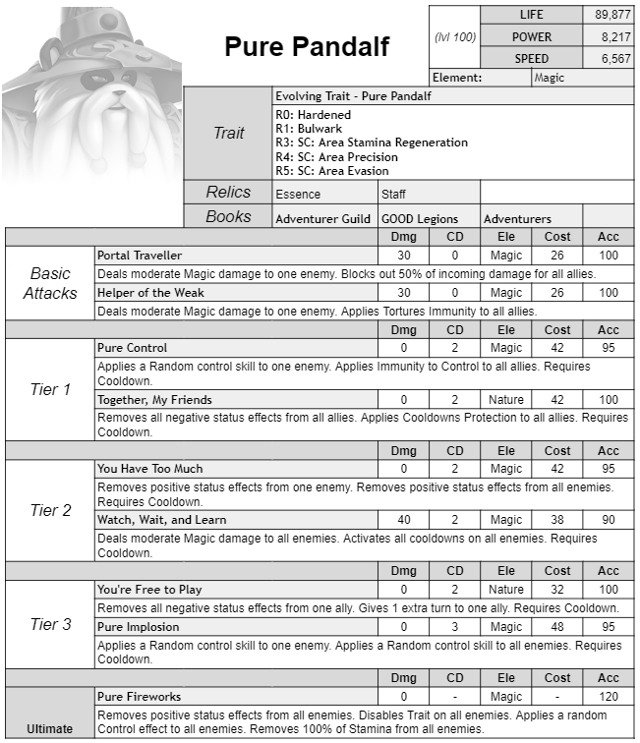