Wickah was used to not getting anything for free. Her whole life, as the protector of all swamp creatures, she’d had to fight for every little thing she’d wanted them to have. That doesn’t mean she hadn’t enjoyed a couple of victories.

After threatening the council of protectors of the Cardinal Forest with an invasion, she finally got her seat at the table and was able to give her protegees a voice. The victory allowed her to improve the situation of the swamp significantly. Resources from other parts of the forest were finally flowing in.

But that flow came to a halt when the Lutum explosion happened. The swamp was one of the most devastated areas, but everyone was too busy working on their own cleanup and restoration to pay attention to them. They all turned their backs on the swamp again, even though it desperately needed help. Wickah did everything she could. She spent day and night coordinating her protegees and she only left the swamp to find help outside it. No luck. King Daeron, the Adventurers,... all the neighboring areas had their hands full with the battle against Corruption. She and her monsters were alone and forsaken again.

It was in the middle of this crisis when Warmaster Remntar and Junsuina Kaori appeared around the swamp. At first, Wickah thought that King Daeron had finally sent her support, but it wasn’t that. In fact, they had come to ask her a favor: They wanted her to keep The Lord’s sword at the swamp so that he and his servants wouldn’t find it.

That was the last straw for Wickah. After being denied any kind of aid, she was being asked for help, and to put her beloved swamp creatures in extreme danger by making them the only obstacle between The Lord and his relic.

What would happen when The Lord found out and his servants assaulted the swamp? Would anyone stand by its inhabitants? Of course not! These visitors just wanted the trouble to happen somewhere away from their own homes!

But Remntar didn’t give Wickah time to say what she was thinking. He just handed her the sword. And then it happened: When it came into contact with her furious flesh, she was transformed into Anwrikah. Now she had enough power to protect the sword, but she didn’t want to. She hadn’t lost any of her exceptional intelligence in the transformation and she had a plan. She would use the sword as a negotiation tool. Maybe now someone would listen. Maybe The Lord was willing to help in exchange for his precious relic. After all, as Anwrikah knew too well, no one gets anything for free.

Anwrikah is a Nature Attacker who can Blind enemies, deal Triple Damage to them, and give Damage Boost and Precision to allies. She has an Evolving Trait: At rank 0, she has Area Dodge, at rank 1, she gains True Vision and, at rank 3, she becomes a Status Caster, applying Poison to all enemies at the start of the battle. 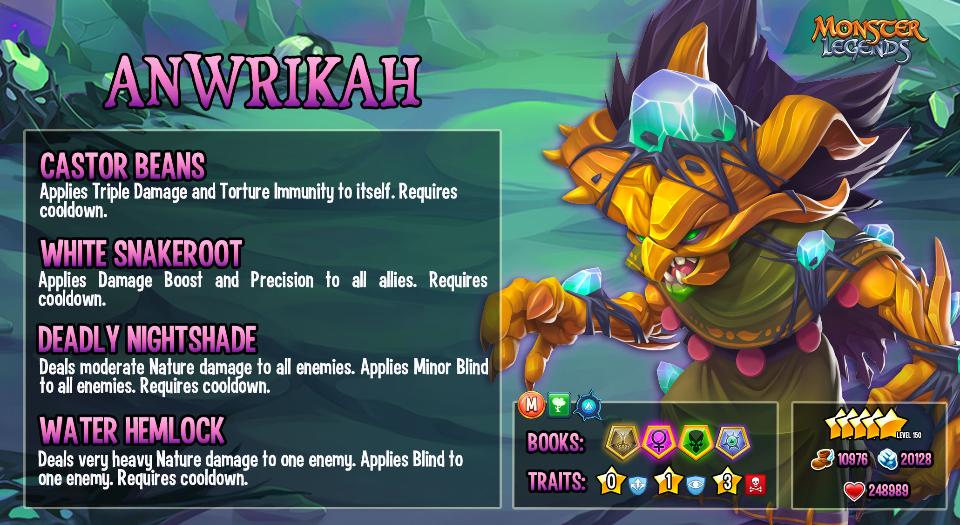 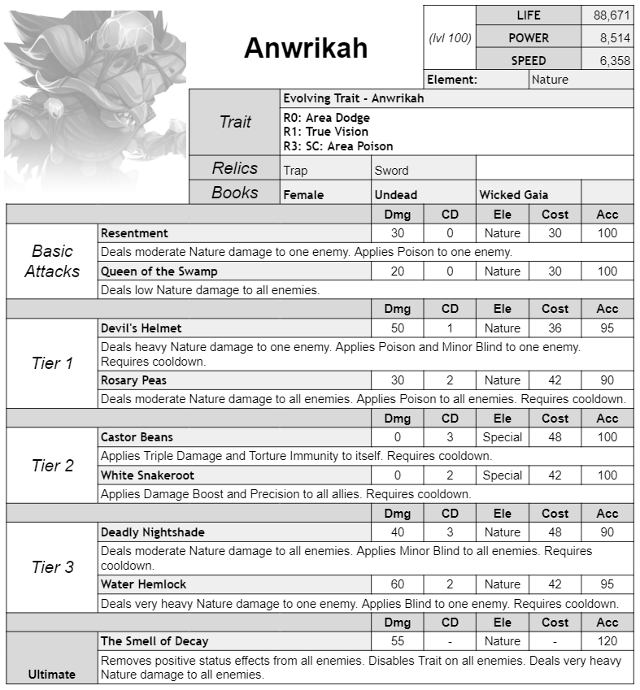