Necromancer and Barbatos are old enemies. Because of Necromancer's resurrection skills, many souls that belonged in the realm of Barbatos have stayed amongst the living, but years ago, Barbatos had his revenge in the worst way: He stole Necromancer’s brother, Necrolicht, from the world of the living. Necromancer tried to find Necrolicht every way he could, but he was being kept in a high-security area of Hell.

Time passed and Necromancer lost all hope, but then, after the Cosmic explosion, he heard that new portals had opened into Hell and he knew that he had to try once again. He crossed the Cosmic portal and tried every portal in the network until he made it: He found the right entrance to the Underworld and quickly found Necrolicht, except he barely looked like Necrolicht at all anymore. Hell had clearly taken its toll on him. Nonetheless, the minute he saw Necromancer, he ran to him. It was time to go home.

The two siblings escaped Hell, but not without a couple of fights against demons who tried to stop them. Little did the demons know that, when they were together, they couldn’t be stopped. Necrolicht had been inactive for so long that crossing the Cosmic portal had a revitalizing effect on him. He was ready to make up for all the years he’d wasted in Hell, but a dark energy he couldn't ignore had grown inside him during his captivity, and it wasn’t going away, even if he had regained his freedom. 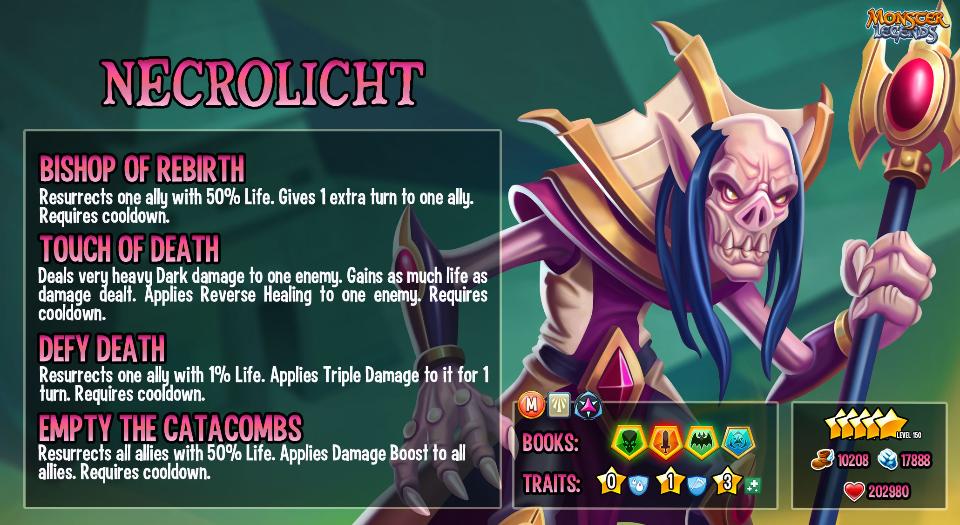 Necrolicht is a Light Support monster with Resurrection and Life Stealing skills. He can bring his allies back from the dead and turn them into deadly weapons by giving them extra turns, Damage Boost, or Triple Damage. He can also Steal Life and apply Reverse Healing to a single enemy. Necrolicht has an Evolving Trait: at rank 0, he's Immune to Bleed, at rank 1, he's Immune to Immediate Death and, at rank 3, he becomes a Status Caster, gaining Life Regeneration at the start of the battle. 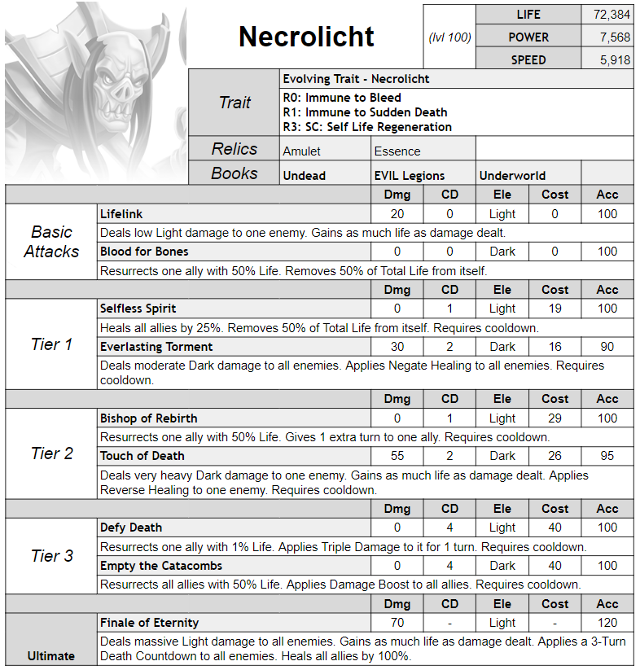