Dr. Viktor was an only child. Because of this, he spent all his time playing alone with his science kit. When he was 10, he asked for a new microscope but, instead, his parents gave him a piece of amber. They told him: “What’s the thing you want the most? Hold this tight and concentrate on it. It will become true.” The present made little Viktor change his mind. There was something he wanted more than the microscope; someone to be able to play with, a brother. The Mythic Amber stone released its magic along with little Wattz.

Viktor and Wattz became inseparable. They played together, they experimented together, they were young science masterminds. Their work was outstanding for their age, but little by little, they started to look at each other as competitors. They both wanted to be the single most brilliant scientist, so they started doing experiments behind each other’s back and keeping results for themselves. In the end, tensions were so high they stopped talking to each other and Wattz left Viktor’s side right when they were about to open a Monster Lab together.

He discovered he had been conceived from Mythic Amber and realized that if he gathered enough of it, he could build his own army of monsters to either help him with his experiments or get rid of his competitors. He built himself a lab inside a hidden cave where no one would bother him. It was also in a strategic location by an amber mine.

Until this day, every night, when miner dwarves go home, Dr. Wattz comes out of his cave. He sneaks into the mine and steals some of the amber unearthed that day, and takes it back to his cave to bring his servants to life. He’s playing a dangerous game but, for now, he’s winning.

Dr. Wattz is a Thunder Attacker with high damage skills. He can also apply Daze or Shock to all enemies, as well as remove negative effects from itself. Dr. Wattz has an Evolving Trait: at rank 0, he's Immune to Cooldown Activation, at rank 1, he gains Immunity to Burn, and at rank 3, he also becomes Immune to Blind. 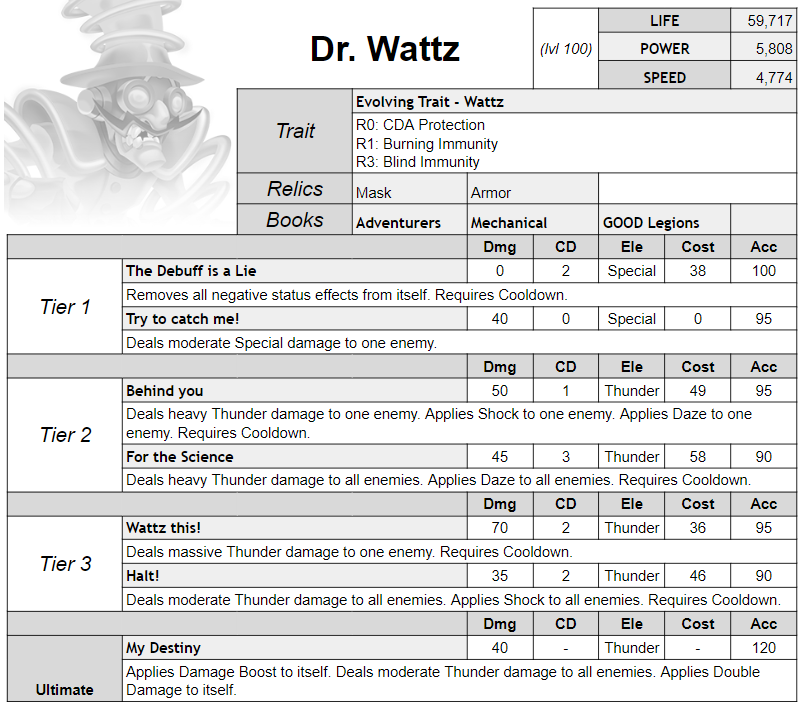