After a tough mission in which the celestial legions helped the miner dwarves, Warmaster Babari gave his counterpart Elvira a very special jewel as a token of his gratitude. It was a precious locket with an amber gemstone. As they walked together to the exit of the mine, Babari said: “Your troop of angels is outstanding, Elvira, you must be proud.”

“I am”, she replied, “but there are so many corners of this universe we haven’t explored, particularly outer space. It’s become my obsession. There’s a lot of light but also a lot of darkness there”.

“You put too much pressure on yourself, don’t worry about outer space right now!”, said Babari as they reached the exit of the mine. After that, he helped her put on her new locket and they bid each other farewell.

Elvira went home with her new locket but she couldn’t get the conversation she’d had with Babari off her mind. What happened in outer space, where there were no angels? What would a space angel look like? Would it be dark and merciless, or would it be bright and compassionate?

As she went to sleep with all those questions in mind, the gemstone in her locket released a substance which floated away from her and materialized into two angels that were everything Elvira obsessed over. One was bright, compassionate, almost godlike. Its name was Arumel. The second was called Cyberiel, and it was just like Elvira feared: dark and merciless.

The two angels are completely different, but they have one thing in common: They’re Mythics!

Arumel is a Light Attacker with multiple self-protections and heavy attacks. She can apply Sunburn, Burn, and Blind to all enemies in one hit, or gain a Photophobic Shield to protect herself from incoming damage. She can also buff herself with Evil Legions Hater with an extra turn, or clean negative effects and gain Double Damage. Arumel has an Evolving Trait: At rank 0, she's Immune to Daze, at rank 1, she gains Immunity to Blindness, and at rank 3, she becomes a status caster, gaining Evasion at the start of the battle. 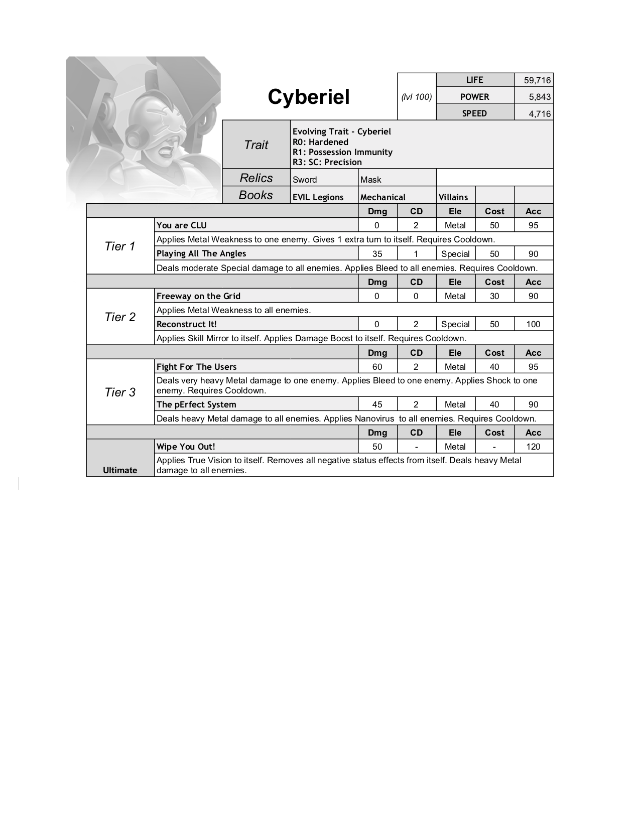