There’s something wrong. Caillech hasn’t been home for Christmas, and it’s her favorite time of the year, she would never miss it intentionally. Her father, Frazerot — a famous wizard of the northern lands, had decorated his ice castle, as he does every year, and bought dozens of presents for his beloved daughter to open, but she never appeared.

“She must be caught up in her battles, after all, my baby’s a big fighter now!” — he thought, trying to convince himself that everything was fine, but after weeks of sleepless nights, Frazerot has realized that he won't shake this feeling of unease unless he goes and checks on his daughter himself.

Welcome to this side of the Monster Legends Universe, Frazerot! Let us ask around… Has anyone seen Caillech? 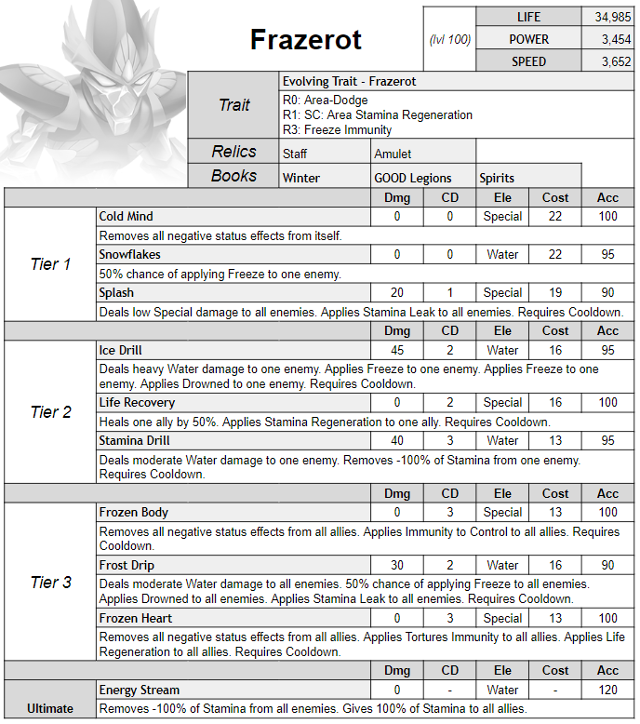 Frazerot is a Water Support monster with stamina removals and Area-Dodge. He can remove negative effects from all allies while giving them Torture Immunity and Life Regeneration, or remove their negative effects and give them Control Immunity. He can also drain enemies' stamina. Frazerot has an Evolving Trait: At rank 0, he has Area-Dodge, at rank 1, he becomes a status caster, applying Stamina Regeneration to allies at the start of the battle. Finally, at rank 3, he gains Freeze Immunity.