Galante had been feeling fragile for a few months now, and noticed his extraordinary breeding powers were at an all-time low. He tried to pretend that everything was okay for a while, but eventually, he decided that it was time to look for a solution.

He was introduced to Gretchen, a witch who supposedly had potions for any problem. She told him she could indeed help him but it would take some time. After a couple of months, he went back to her cottage to pick up his potion. She welcomed him and told him to follow her into her back garden, where his potion was cooling down.

The potion let off a pink glittery smoke, and smelled of chocolate. Galante breathed it in and said, "Great work! Taking this will be much nicer than I thought. Now, pack it for me and I'll be on my way."

"Excuse me?" said Galante unpleasantly. "Do you know who I am?"

"Oh, dear, I couldn't care less who you are, I don't work for free. Also, you don't look like you're doing too well with your current powers!" said Gretchen as she burst into laughter.

Galante took her words as an insult and rapidly jumped to attack her. She returned his attacks swiftly, but in the middle of this quarrel, one of Galante's skills knocked over the cauldron and spilled the potion all over the garden. Gretchen screamed: "Look what you've done, you fool! It took me months-" but before she could finish the sentence, the ground started shaking, it broke apart, and a massive, monstrous rose was born from it.

Gretchen and Galante looked at it, both petrified. The rose pulled its roots out of the soil and, without even a glance at the frozen spectators, walked past them and made its way into the forest.

After a minute or so, Gretchen finally broke the silence and said: "You said you were here because our community needed more breeding power? Well, there it goes. That's the embodiment of breeding power. Watch out. It might even eclipse you!" Roaring with laughter, she went back into her cottage, leaving a confused Galante alone in the garden.

Urtikus is a Nature Attacker with Control Immunity and Anticipation. He can remove positive effects and deal high damage to a single enemy without spending stamina. He can also deal damage and apply Bleed and Nightmares to all enemies with one skill, or buff himself with Evasion and Double Damage. Urtikus has an Evolving Trait: at rank 0, he has Anticipation. At rank 1, he gains Immunity to Bleed, and at rank 3, he also becomes Immune to Control. Finally, remember that Urtikus is the fourth and latest Breeding Joker in Monster Legends! 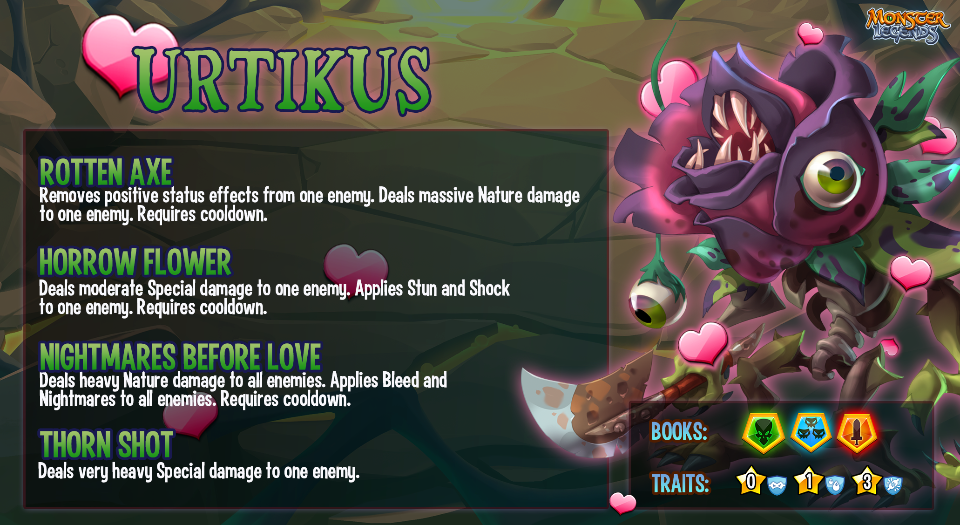