For a long time, Warspellz was unhappy with the direction the orc tribe was taking. He missed the old days and his deceased leader, Gurlik, who had been betrayed and was thrown into a swamp by his successor, Borjork. Warspellz felt so nostalgic that he decided to do something about it. He gathered all his charms and potions and found a concoction to summon Gurlik from the dead.

However, Warspellz is a shaman, not a professional resurrector. The result was that Gurlik returned more like a zombie than the impressive orc he used to be. He rose from the bed of the swamp pale-faced yet glorious, riding a massive toad called Gurmit, and even though he was changed, to this day he still remembers everything that happened to him, and vengeance is now the blood running through his once dead veins. Gurlik is back.

Gurlik is a Nature Attacker with self-buffs. He can apply several Tortures such as Poison, Bleed, and Nightmares. One of his attacks is a gamble: He can either gain Triple Damage for 2 turns and extra turn, or he can transform into a baby instead. As a baby, he can't be targeted, but he can't attack either. He has an Evolving Trait: He's an Orc (negative status effects have 25% fewer chances of hitting) at rank 0, he gains Gravedigger (Immune to Possession, Corruption, and Nightmares) at rank 3 and at rank 5, he becomes a Status Caster of Self Stun Immunity. 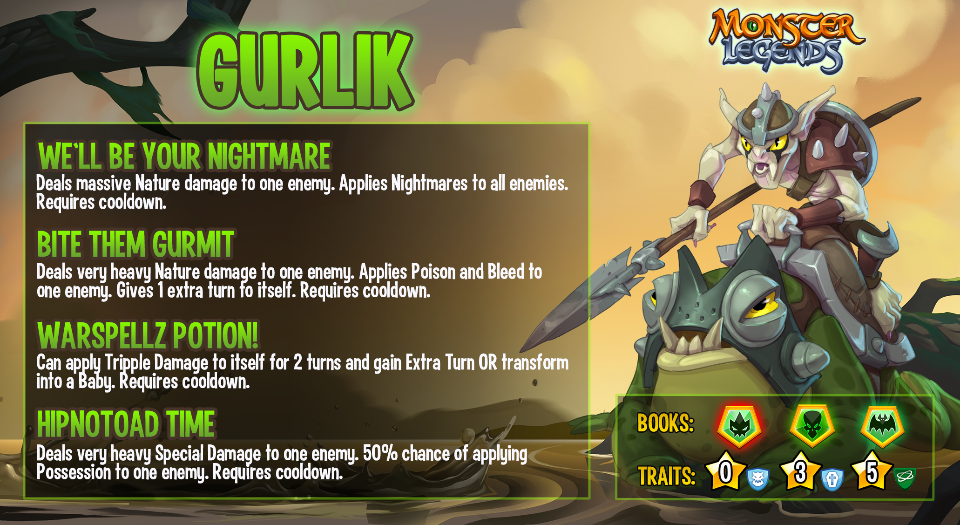