Ihtiander spent his entire youth under the sea, but he always wondered what the world outside would be like. His dad, Enypiast, was very protective of him and he wouldn’t let him go out and explore. But one day, Ihtiander had a dream in which Yilitre gave him magical eyes to see not only what happens far away outside the sea, but also the future and the past. When Ihtiander woke up, he realized he had eyes all over his body and that, in fact, he had the powers Yilitre had given him in the dream! However, ever since he saw what the future holds for his home sea, he knows that it is his duty to stay and warn its inhabitants.

In the battlefield, Ihtiander doesn’t only see the future, he can control it: He has a variety of Stun skills and Freeze skills, for both area and single enemies! His special skill can Possess all enemies! You’ll see there aren’t many ways to avoid Ihtiander’s power. 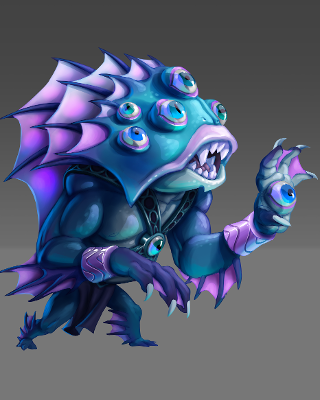