Team Battlegrounds are Team vs Team competitive events, that build on top of the Team Wars framework, but add a new layer of strategy and coordination between teammates.
Assemble your Monster army and join us on the Battlegrounds!
---
Requirements
In order to participate in this event, both you and your team will need to fill certain requirements.
Individual players will need to be at level 40 or above to enter the event.
Teams will need to:
---
Preview Phase
The “Preview Phase” is when players can start entering the event’s main view and learning about both the restrictions and rewards. This phase starts a few days before the main event begins, so that players can have enough time to check the requirements and prepare themselves. 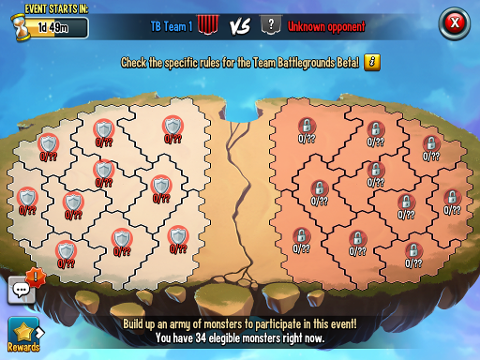 NOTE: It’s important to know that restrictions and rewards may change once the Preview Phase ends. If teams from different tiers get matched, both teams will see the restrictions and the rewards from the highest tier.
---
Matchmaking Phase
After the Preview Phase ends, the event will enter the Matchmaking Phase. This phase will last between one and two hours. During this phase, players cannot leave their teams or be kicked.
---
Defense Phase
During the Defense Phase, teammates need to communicate with each other, deciding the overall strategy for the team, determining where they should place their defense Monsters, and so on 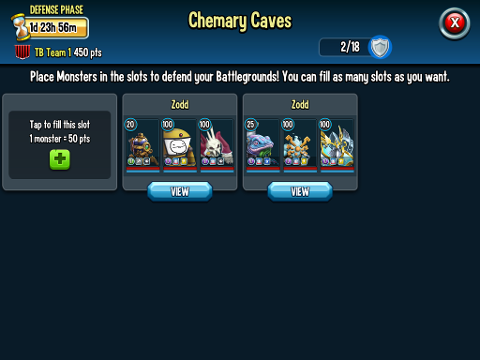 During the Defense Phase, players and teams can earn score by filling defense slots in their battlegrounds. For each Monster placed, both the player and the team will earn 50 points, which means a maximum of 150 points (50 points x 3 Monsters) per slot.
WARNING: It’s important to note that Monsters placed in defense slots cannot be used to attack, so players and teams need to be very careful with how they manage their Monster army.
The number of slots per battleground will change based on the number of players in the participating teams. For example, if Team A has 24 players and Team B has 25, the system will calculate the total number of slots by looking at the team with the highest number of players (in this case it would be Team B with 25 players).
When a team destroys a battleground, it gets a huge amount of points. Depending on their position, battlegrounds can be worth more or less points. The ones at the center are worth less but are also easier to defend (less strict restrictions), while the ones at the back are extremely valuable, but also require more “exotic” Monsters to defend.
Pick your defenders wisely!
---
Attack Phase 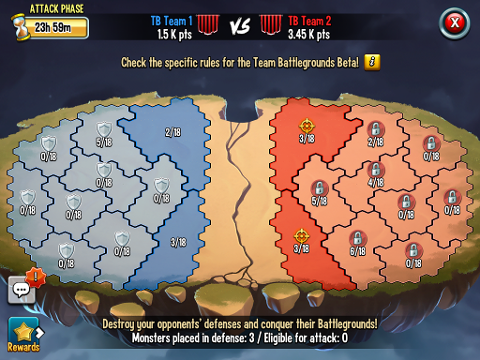 During the Attack Phase, players must use their remaining Monsters to fight through the opponent’s defenses and destroy their battlegrounds.
WARNING: At the end of the Defense Phase, the players’ entire Monster rosters will be “frozen”. This means that, while you can still feed and rank up your Monsters (as well as equip them with Runes and Relics), these changes will not be applied inside the event, so make sure that you go into the Attack Phase with your best possible army.
Similarly to the Defense Phase, each player in the team can perform 5 Attacks. If the teams have different amounts of players, some players might also be granted extra Attacks in order to compensate for the difference in number of members in the team.
In this phase, players can earn points in three different ways:
IMPORTANT: Monsters used for attack will become exhausted after battling.  Players will only be able to use each Monster ONCE in the Attack Phase. Make sure you go into the Attack Phase with enough Monsters to be able to defeat your opponents.
---
Qualification
In this event, both the team as a whole and the individual players must reach a minimum qualification score in order to claim the rewards. This is a measure to avoid players joining teams and being idle for most of the event.
Qualification scores, both for the individual players and the team, are also dynamically calculated based on the number of slots available.
To qualify, players and teams should do their best to fill the most defenses possible and to do the highest possible number of attacks. If you’re inactive during either Defense or Attack Phase, you might find it difficult to qualify before the end of the event.
---
Rewards
At the end of the Attack Phase, the team with most points will be declared the winner and will have access to the higher-value reward pool, while the losing team will have access to a lower-value (but still quite good) reward pool.
On the (rare) situation where both teams tie, they both will receive the second place reward.
Rewards are also different based on your current League. The higher your Team’s League, the better your rewards will be.
In this event, as a final reward, you will get a big amount of War Medals that you could get only winning multiple Team Wars! With War Medals you can purchase exclusive content in the Team Shop. 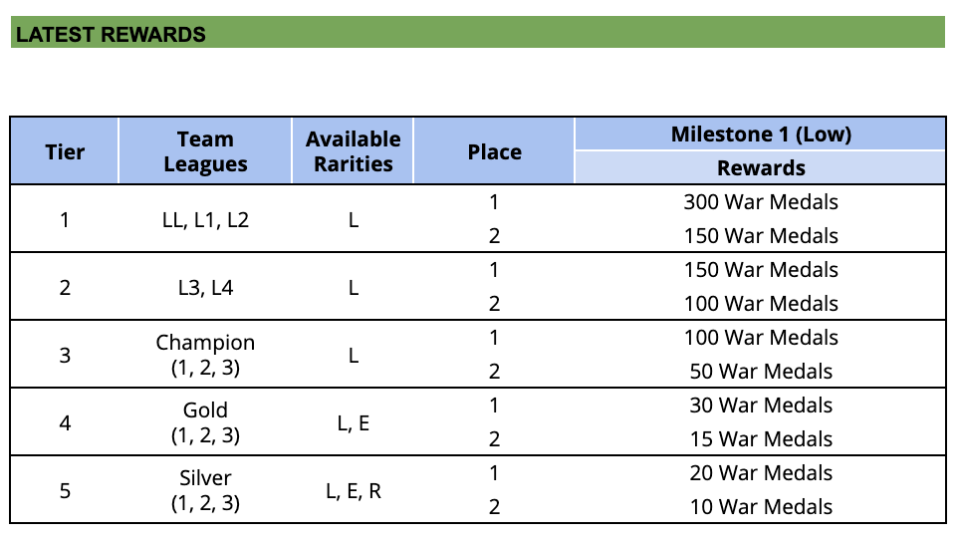 ---
Enjoy the new Team Battlegrounds mode and join us on Discord to discuss the best strategies for the event! https://discord.gg/cmpSPeu
Have fun!
Last Updated: 817d • Permalink
ICP 2020026027-1