Dragon Masters!
Christmas time is here! ️ Deus and Gaia are preparing to celebrate it with all of the dragons in Dragon City.
This year it will be quite special: the great High Winter Dragon will be coming to celebrate Christmas in Dragon City! But, once again, the evil forces are threatening us!
One morning, Deus and Gaia were taking a stroll through the City and noticed that the sun was shining very bright. It actually was very hot. As the days passed, the heat only increased! So they began to worry. Most dragons [except for the flame ones! ] started feeling weak and ill from all this heat.
What could be causing this abnormal weather? What would happen with the Christmas celebrations?
Before it got too bad, they hear a telepathic message from another realm: it was the High Winter Dragon himself! According to him, some very powerful force was altering the weather creating a permanent (and very hot) draught that could damage Dragon City's ecosystem irreversibly! Then he explained that because there is no winter he is almost powerless, rendered unable to come to help.
However, he has a solution: Deus, Gaia and the Dragon Masters needed to summon the Heroes of Winter, the only ones powerful enough to restore the winter. The orbs needed for this were long safeguarded by the four dragons of seasons, who inhabit the Seasons' Island. Thus, Deus and the Dragon Masters embark on this journey.
Well, now it’s time to reveal the event lineup for DECEMBER!
Events Overview:
The new #DragonCityStory Event will accompany us during this month and will walk with us to the New Year! Winter is in danger, and all your Dragons will need your help to save them!

Take down the evil weather control machine, built and hidden in a remote corner of the land. It was guarded by a few dragons that were under the mind control of an evil force, the same dragons that previously raided the island.
How to beat the Machine?
Get to the top of the Tower and break the spell from the Lunatic Dragon by claiming him!

With the winter season restored and everything back to normal, the High Winter Dragon regains his full might! It will be the time to race in the Winter Heroic Race and claim him!
You will be able to find orbs all for the 4 Hero´s of Winter Dragons in the following places so keep your eye out if you need to get more!
For the collectors, there will be a new collection for the 4 Legates of Winter Dragons, collect them all and claim the Uller Dragon!
This month, we will also be offering other special Temporary Quests, Element Weeks, and special Breeding Events! For the special breeding combinations, be sure to check the game BREEDING EVENT ISLAND.
There will be many offers coming this month, so make sure you come back frequently to get the dragons you want/need!
We can’t wait to start this month and hear from you guys! We hope you enjoy it! And remember guys, keep writing your #DragonCityStory!
See you back on the islands! 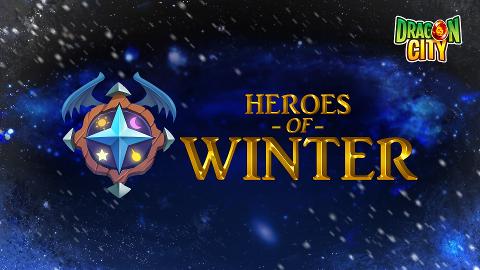